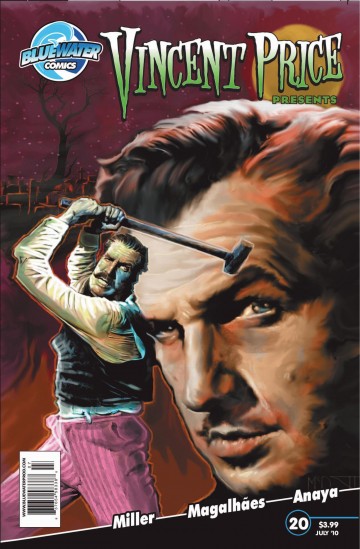 Nominated for a Rondo Award! The sequel to the cult film Witchfinder General is here. Matthew Hopkins was one of the most notorious witch hunters in recorded history. But how did he become such a ruthless persecutor of evil? Find out why no one is safe from the wrath of the Witchfinder General in this one-shot prequel to the cult classic film also known as The Conqueror Worm.

Read the album
Add to cart
Added to your cart
V.10 - Vincent Price Presents
(0)
$11.99
Vincent Price is the master of the cult gothic horror films. In this graphic novel is the sequels to the classic films Witchfinder General, Last Man on Earth and Tingler.

Read the album
Add to cart
Added to your cart
C.37 - Vincent Price Presents
(0)
$3.99
In this special Centennial issue to commentate the 100th birthday of Vincent Price, will feature a special crossover with Dracula vs Vincent Price vs the Raven.

Read the album
Add to cart
Added to your cart
Vincent Price Presents #0
(0)
$3.99
Check out the series that started it all in this all new story featuring one of Mr Price's classics… Last Man on Earth. One of classic Hollywood's most famous scary men, Vincent Price made a name for himself in classic mysteries and thrillers throughout the 1940s, 50s and 60s. Now Vincent Price Presents comes to TidalWave Productions as their 1st ongoing monthly series. The series will feature some of Price's films as well as developing new frightening ones with his estate. Welcome back to the macabre world of Vincent Price.
Become a super reader
Write reviews and get comics for free!

Read the album
Add to cart
Added to your cart
C.1 - Vincent Price Presents: Tinglers
(0)
$3.99
In this SPECIAL 2-PART SERIES, the direct sequel to the Vincent Price classic THE TINGLER, Dr. Chapin and his crew search for a primitive tribe with ties to the elusive creature spawned from fear with a grip like iron. But what they find in the dark jungle gives new meaning to the word terror!