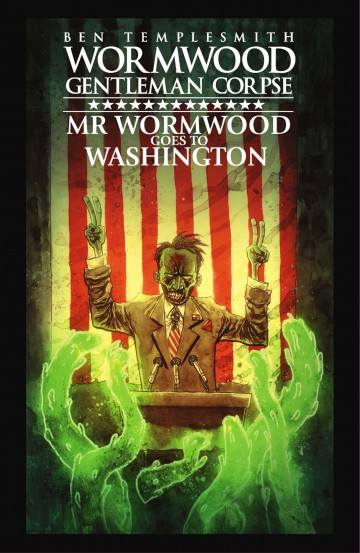 Comics’ most genteel zombie returns with his signature blend of macabre humor, hilarious horror, gore, gags (the funny kind), and gags (the trying-not-to-vomit kind). Wormwood has been gone for some time. Too long, if you were to ask his old friends. So, when a special agent from the U.S. government asked for Wormwood’s help, they were determined to track him down, no matter what dimension he’d buggered off to. Now that he’s back, things are about to get political. He and the gang are off to Washington, where, for once, his heart may be the warmest one around.

Read the album
Add to cart
Added to your cart
V.3 - Wormwood, Gentleman Corpse
(1)
$7.99
Just when Wormwood thought he could finally have that quiet drink without worrying about the world coming to an end, or a friend with a parasitic infection trying to kill him, The Brotherhood of the Calamari decide to crash the party. Since their last meeting, they've tracked him across the thousand million dimensional possibilities of existence—and this time the entire Squideeverse is with them! Wormwood is going to learn the hard way he can't keep running from his problems as his oldest foe now threatens his favorite watering hole, Earth, with absorption into the Calamari group mind!

Read the album
Add to cart
Added to your cart
V.1 - Wormwood, Gentleman Corpse
(0)
$7.99
A tribute to women in comics & manga!
Enjoy adventures from a female perspective!

Read the album
Add to cart
Added to your cart
V.2 - Vanquished
(0)
$1.99
Volume 2 - Castle Valiant is overrun with Alfainians, and the few Ma’pah soldiers aren’t enough to hold them back for long. Led by dinosaur riding Lord Gronk, the sadomasochistic Lord Stephens, and more the odds are stacked against Valorie Valiant – the transgender princess of Valenguard. She’ll have to put her trust in the assassin sent to kidnap her just to escape, but will that be enough?

Read the album
Add to cart
Added to your cart
Memory Collectors
(0)
$5.99

Read the album
Add to cart
Added to your cart
Bleedout
(0)
$7.99
Close