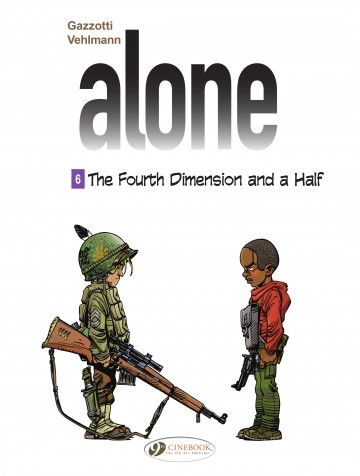 After the terrifying discovery of the monolith in the red zone, the children must now adapt to having Dodziback among them – something they never expected. Problem is, Saul, too, is back, and the Clan of theShark has relocated to Campton. While Ivan begins investigating the 15 families that his father oncementioned, a territorial struggle begins between the two groups – one that soon turns to open war. AndSaul will stop at nothing to assert his authority.

This digital comic is available in english version. The following reading modes are available with the izneo reader:
Alone- Volume 6 - The fourth dimension and a half - Fabien Vehlmann - to read online on izneo or download on your iOS and Android tablet or smartphone.

Read the album
Add to cart
Added to your cart
V.11 - Alone
(1)
$5.99
While trying to escape an avalanche triggered by the killers of the First Families, Ivan drowned. Though this is a less permanent problem that it used to be for the children, Ivan ‘returned’ far from his friends, in a small village in Brittany where he used to holiday with his parents. There he lives alone, preparing for the long trip back to Neo-Salem. Until the day Camille, now revealed as the Midnight Child, pays him a terrifying visit, and the nightmare begins …
eazyComics

Read the album
Add to cart
Added to your cart
V.1 - Alone
(9)
$5.99
Become a super reader
Write reviews and get comics for free!

Alone- Volume 6 - The fourth dimension and a half - Fabien Vehlmann - to read online on izneo or download on your iOS and Android tablet or smartphone.

Read the album
Add to cart
Added to your cart
V.4 - IAN
(1)
$5.99
Ian will have to choose a side now – AIs or Humans... A year has passed since the Los Angeles riots, but Ian is still being hunted by the Pentagon. Extremely hostile treatment by the media has also made him a favoured target of a majority of American citizens. Tracked down by an ambitious reporter, the android gets in touch with an eccentric billionaire who promises to tell him what the Nome is – that super-powerful artificial entity with whom he seems to have a mysterious bond... A merciless cascade of new revelations follows...
eazyComics

Read the album
Add to cart
Added to your cart
Last Days of An Immortal
(0)
$9.49