V.3 - Doctor Who: The Eleventh Doctor 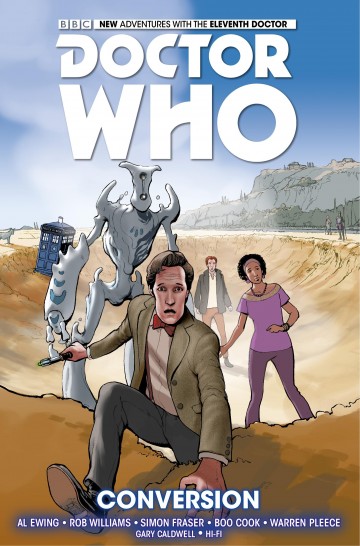 The Eleventh Doctor’s bold new adventures continue, as the Doctor is confronted by his greatest failure, Alice faces her darkest hour, the shapeshifting ARC’s origin is revealed, and chameleonic pop star Jones reaches transcendence! All this, and a Cyber-invasion of ancient Rome… and the final stand against the Talent Scout! Astounding writers Al Ewing (The Ultimates, Loki: Agent of Asgard) and Rob Williams (Ordinary, Martian Manhunter) team with three magnificent artists, Simon Fraser (Nikolai Dante), Warren Pleece (Hellblazer) and Boo Cook (Elephantman), to continue the all-new epic adventures of the Eleventh Doctor – as played by Matt Smith! Collects Doctor Who: The Eleventh Doctor #11-15

Read the album
Add to cart
Added to your cart
C.1 - Doctor Who: The Eleventh Doctor
(0)
$4.59
A tribute to women in comics & manga!
Enjoy adventures from a female perspective!

Add to cart
Added to your cart
V.5 - We Only Find Them When They're Dead
(0)
$3.99
Destiny has come for the endeavors of the Vihaan II. Malik and Richter face off for the last time and only one will survive. Their uncertain futures will be forever changed by a shattering discovery.