V.7 - Doctor Who: The Tenth Doctor 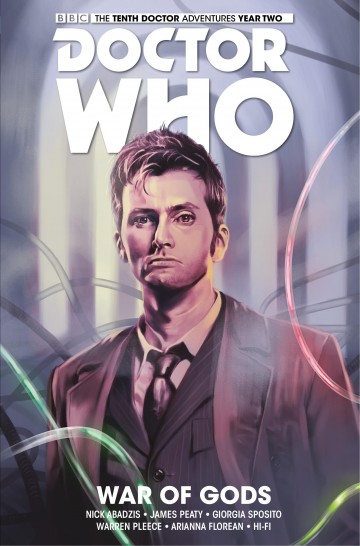 The epic conclusion of the Tenth Doctor’s second year of all-new adventures! On the impossible starship Shining Horizon, the ancient entity Sutekh has risen again – and this time, he’s brought some fearsome allies! Will the TARDIS team, along with Dorothy and Anubis, be able to stop them? Join the Doctor, Gabby, and Cindy for more adventures and battles against ancient gods! Superstar writers Nick Abadzis (Laika) and James Peaty (Supergirl), along with brilliant artists Giorgia Sposito (Wonderlan, Charmed) and Warren Pleece (The Great Unwashed), steer the TARDIS through this game-changing next chapter in the Doctor’s ongoing story!

Read the album
Add to cart
Added to your cart
V.1 - Doctor Who: The Road To The Thirteenth Doctor
(0)
$7.99
At the end of his life, the Twelfth Doctor faced his darkest hour: losing his beloved companions Bill and Nardole in an impossible stand-off against the Cybermen, and losing Missy to herself, not long after. Mortally wounded in battle, he could see no reason to go on. He was willing to die a final death. But a surprise, time-twisting encounter with his oldest self, the first Doctor, led him to recover his desire to go on – to start again. It’s time for change. For regeneration. And the Doctor has a few things to say to the Doctor that is to come. For in his warren of memories and the many lives past lies the key to a brilliant future…