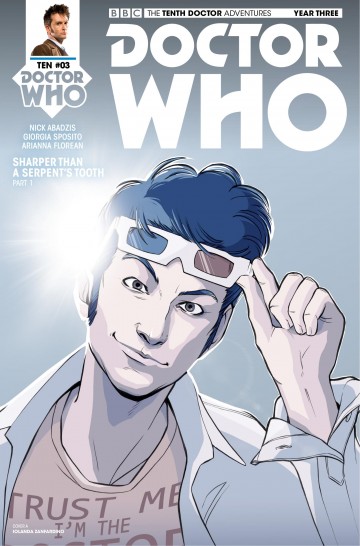 The Doctor, Cindy, Gabby, and Noobis fought the battle of their lives to escape from a terrifying dreamworld, one in which their every secret desire seemed to be catered for, but at a terrible cost…! The culprit behind this nightmare was none other than an entity…which had disguised itself as a red TARDIS! Displeased that its captives had escaped, it reached out and kidnapped Cindy, dragging her into the Time Vortex!

Read the album
Add to cart
Added to your cart
Shy Ninja
(1)
$7.99
Young Rena suffers from a social anxiety disorder. It keeps her from engaging at school, from hanging out with her best friend in person, or participating in any sort of group activity. Pressed by her mother to find some social outlet, she enrolls in a School for Ninjas—and in an instant, her life changes. Rena’s instructor, the mysterious Dysart, tells her that her presence fulfills an ancient prophecy and that she will become the Ninja legend known as “The Ghost.” Assuming she can even get past her own anxieties, will she help Dysart return the Ninja to their former glory, or is Dysart planning to exploit Rena for his own cryptic aims?

Read the album
Add to cart
Added to your cart
Doctor Who Archives: Prisoners of Time - Chapter 10 - The Tenth Doctor
(0)
$3.59
Close