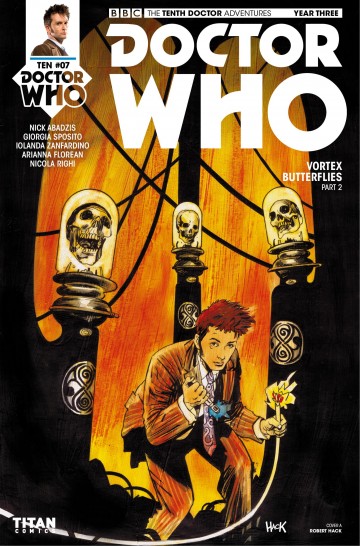 After their collective ordeal in Ancient China, the Doctor received a mysterious signal… which turned out to be from his future self! Though the Tenth Doctor won't remember the exact details of their meeting, the warning from the future will linger… Having abandoned Gabby and Cindy in London at the house of an old friend, it turns out the Doctor may have left more problems than solutions in his wake - as Gabby's powers began to manifest on an unprecedented scale!

Read the album
Add to cart
Added to your cart
C.1 - Doctor Who: The Tenth Doctor
(0)
$4.59
A tribute to women in comics & manga!
Enjoy adventures from a female perspective!

Read the album
Add to cart
Added to your cart
V.1 - Doctor Who: The Road To The Thirteenth Doctor
(0)
$7.99
At the end of his life, the Twelfth Doctor faced his darkest hour: losing his beloved companions Bill and Nardole in an impossible stand-off against the Cybermen, and losing Missy to herself, not long after. Mortally wounded in battle, he could see no reason to go on. He was willing to die a final death. But a surprise, time-twisting encounter with his oldest self, the first Doctor, led him to recover his desire to go on – to start again. It’s time for change. For regeneration. And the Doctor has a few things to say to the Doctor that is to come. For in his warren of memories and the many lives past lies the key to a brilliant future…

Read the album
Add to cart
Added to your cart
Doctor Who Archives: Prisoners of Time - Chapter 10 - The Tenth Doctor
(0)
$3.59
Close