C.2 - Doctor Who: The Tenth Doctor 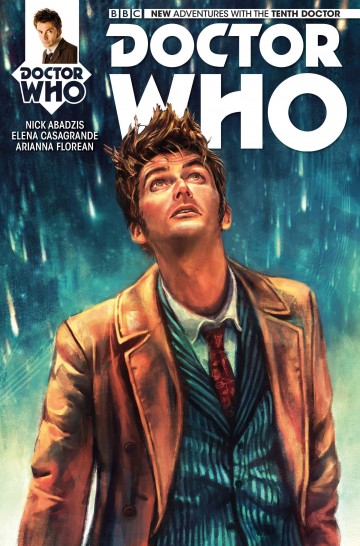 ON THE DAY OF THE DEAD, THE MYSTERY DEEPENS - IN A BRAND-NEW BROOKLYN ADVENTURE FOR THE TENTH DOCTOR!All Gabriella Gonzalez wanted was to skip her shift at the Laundromat and hang out with her friends. It’s Halloween, and Sunset Park is hosting its first-ever Day of the Dead festival! But her father wouldn’t listen – again – and now Gabby is stuck with a store full of empty washing machines while the rest of the neighborhood goes wild.But this graveyard shift is living up to its name! Vortexes explode out of the machines, shadowy creatures stalk on the edge of sight, and Gabby finds herself pursued by unearthly forces.Finally, on the longest night of her life, Gabby is trapped in a powerless subway car – and the only thing standing between her and horrific death-by-monster is some skinny guy in a suit – who’s waving a blue flashlight around!If Gabby survives this – she’s going to kill him!Eisner Award-winning Nick Abadzis (Laika) and fan-favorite Elena Casagrande (Suicide Risk) ramp up the tension, horror, and joy of discovery – as a new companion meets the Tenth Doctor!Plus: every packed issue also includes a ‘Titans’ strip, and a brand-new humor strip!Doctor Who, the Daleks, the Cybermen, TARDIS and all other characters and logos are trade marks of the BBC and are used under licence unless otherwise indicated.

Read the album
Add to cart
Added to your cart
V.1 - The X-Files: Case Files
(0)
$7.99
For 25 years, FBI agents Fox Mulder and Dana Scully have been shining their flashlights into the shadows, searching for the truth. In The X-Files: Case Files, faithful fans will discover stories that explore X-Files of the past and present by top talent from comics and prose! This first volume includes “Florida Man…” by Star Wars author Delilah Dawson with art by Elena Casagrande and Silvia Califano, and “Hoot Goes There?” by multiple Bram Stoker Award winner Joe R. Lansdale and Keith Lansdale with art by Silvia Califano.