C.3 - Doctor Who: The Tenth Doctor 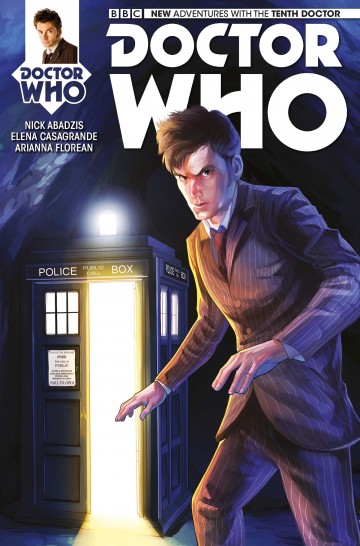 THE TENTH DOCTOR FACES EMOTIONAL ARMAGEDDON IN NEW YORK!Torn between the homeworld of vicious psychic parasites, and the worsening chaos in Sunset Park, the Doctor must battle through his worst nightmares in order to save the lives of everyone in New York – and the world!His sole ally, if she’s strong enough to withstand the aliens’ psychic predations? Gabriella Gonzalez!With the help of a trusty Sonic Screwdriver and a frustrated Mexican-American artist, trapped in her father’s Laundromat… can the Doctor defeat the ultimate bad spirits?And what will be left of Gabby’s corner of the world if she and the Doctor succeed?Nick Abadzis and Elena Casagrande are joined by new regular cover artist Verity Glass to blow the TARDIS doors off – as Gabriella’s first arc comes to a stunning conclusion!Plus: every issue is packed with extras, including humor strips!Doctor Who, the Daleks, the Cybermen, TARDIS and all other characters and logos are trade marks of the BBC and are used under licence unless otherwise indicated.

This digital comic is available in english version. The following reading modes are available with the izneo reader:
Doctor Who: The Tenth Doctor- Volume 1 - Issue 3 - Nick Abadzis - to read online on izneo or download on your iOS and Android tablet or smartphone.

Doctor Who: The Tenth Doctor- Volume 1 - Issue 3 - Nick Abadzis - to read online on izneo or download on your iOS and Android tablet or smartphone.

Read the album
Add to cart
Added to your cart
V.1 - The X-Files: Case Files
(0)
$7.99
For 25 years, FBI agents Fox Mulder and Dana Scully have been shining their flashlights into the shadows, searching for the truth. In The X-Files: Case Files, faithful fans will discover stories that explore X-Files of the past and present by top talent from comics and prose! This first volume includes “Florida Man…” by Star Wars author Delilah Dawson with art by Elena Casagrande and Silvia Califano, and “Hoot Goes There?” by multiple Bram Stoker Award winner Joe R. Lansdale and Keith Lansdale with art by Silvia Califano.