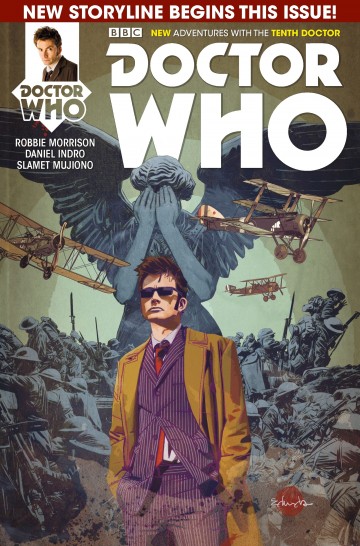 STONE HANDS STALK THROUGH THE CRATERS OF THE SOMME…When Gabby and the Doctor arrive by accident in No Man’s Land in July, 1916, they’re met by Corporal Jamie Colqhoun – a soldier who knows from bitter experience that there are worse things than the Jerries out in the rat-strewn trenches.Things that drift through the smoke of a thousand cannon shells, and move only when you look away. Shadows that flit over artillery-blasted field hospitals and throw their terrifying wings over the living. Statues that steal your life in an instant. The Weeping Angels.But in a conflict where the life of young men is cheap, and thousands die every day – are the Angels actually offering salvation? Trapped in the midst of a flock of starving Angels, the Doctor faces his most challenging and terrifying moral dilemma yet!Robbie Morrison and Daniel Indro take the new Tenth Doctor era to the next level, on the Centenary of World War I! Plus: a jaw-dropping Tommy Lee Edwards regular cover, and commemorative variants!Doctor Who, the Daleks, the Cybermen, TARDIS and all other characters and logos are trade marks of the BBC and are used under licence unless otherwise indicated.

Read the album
Add to cart
Added to your cart
V.6 - Doctor Who: The Twelfth Doctor
(0)
$12.99
In the reign of King Louis XIV, the Doctor dives into the terror in the heart of France when he discovers an ancient, near-immortal entity wearing the undead Cardinal Richelieu like a suit! With the help of sword-slinging opera singer Julie D’Aubigny, can the Doctor defeat the dark tendrils of the Cabinet Noir? If so, he has some lessons for the creators who made a comic book based on his life! Writer Robbie Morrison (Doctor Who: The Tenth Doctor, Nikolai Dante) and artists Mariano Laclaustra (Dark Horse Presents, Assassin’s Creed) and Rachael Stott (Planet of the Apes, Star Trek, Ghostbusters International) continue to explore the thrilling adventures of the Twelfth Doctor. Collects Doctor Who: The Twelfth Doctor #2.11-15.