THE TENTH DOCTOR IS BACK, IN AN ALL-NEW ONGOING SERIES! NEW COMPANION! NEW FOES! UNFORGETTABLE NEW HORIZONS! ALLONS-Y!The Eisner Award-winning Nick Abadzis (Laika) and fan-favorite Elena Casagrande (Angel, Suicide Risk, Doctor Who, Star Trek) take control of the TARDIS for their first five-issue arc with the Tenth Doctor, as played by David Tennant!Gabriella Gonzalez is stuck in a dead-end job in her family’s New York laundrette, dreaming of college and bigger, better and brighter things.So when a strange man with an even stranger big blue box barges into her life on the eve of the Day of the Dead celebrations – talking about an infestation of psychic aliens – she seizes her chance for adventure with both hands.After Donna’s tragic exit, the Doctor thought he was done with new companions. But Gabby Gonzalez is going to prove him wrong… if she survives the night!Regular linked cover by Alice X. Zhang!Plus: every packed issue also includes a ‘Titans’ strip, and a brand-new humor strip)!Doctor Who, the Daleks, the Cybermen, TARDIS and all other characters and logos are trade marks of the BBC and are used under licence unless otherwise indicated. 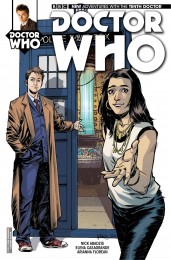 V15 Doctor Who: The Tenth Doctor

END OF YEAR ONE - SEASON FINALE! • Gabby, Cindy and the Doctor face their greatest challenge yet! The whole year has been building to this - what state will the Doctor and his companions be left in when the smoke clears?! • Ancient evil from the heart of the universe! • An impossible decision! • Shocks and surprises right down to the last page! • PLUS! Celebrate the pulse-pounding end of Year One with our commemorative covers by series artist Elena Casagrande - and an amazing incentive by Eisner award-winning writer/artist Nick Abadzis! 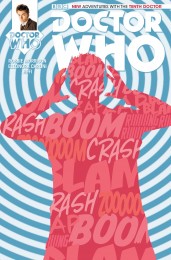 ECHOES OF TORTURE! Gabby and the Doctor are back in New York after a terrifying excursion into the past, catching up with family and friends... until THE ECHO strikes, amplifying everyday noise into ear-shattering, mind-splinteringly debilitating waves of sound. What is the Echo – and can the Doctor and Gabby solve the mystery before the cacophany drives the city mad? Plus: "Doctor... you are coming back?" The fantastic Elena Casagrande and Arianna Florean return on art duties, taking us through to #15 and the end of the first season! Doctor Who, the Daleks, the Cybermen, TARDIS and all other characters and logos are trade marks of the BBC and are used under licence unless otherwise indicated. 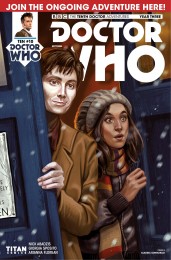 The Vortex Butterfly’s identity has finally been unveiled… but the Doctor is distraught to discover that this entity is none other than his beloved companion, Gabby! Vortex Butterfly Gabby insists that he left her behind, in every possible timeline, and she was forced to build her own world from pieces of space and time. Meanwhile, present Gabby (staying in London with Cindy and Sarah Jane Smith) is experiencing strange things too – her powers have brought her drawings to life! 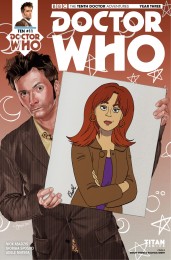 Future ghost Gabby has been revealed as the Vortex Butterfly! The Doctor finally came face to face with the entity that had been intriguing him for so long… but he had to destroy this potential future version of his beloved companion when she threatened the lives of present Gabby, Cindy, and Sarah Jane Smith. Realizing that this manifestation sprung for Gabby’s block transfer abilities, the Doctor enlisted the help of old friend Zhe to help Gabby learn to control her powers… 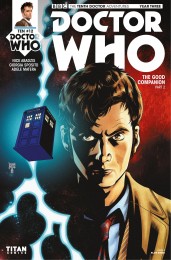 While working with Zhe to control her spectacular block transfer abilities, Gabby was kidnapped by the Red TARDIS! Meanwhile, the Doctor and Cindy were hot on the trail of Marteek, or rather, an imposter pretending to be Marteek, when they received a terrifying message from Cleo… concerning the destruction of Earth. 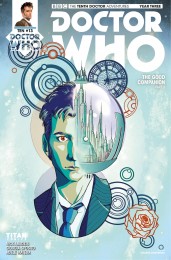 The Time Sentinels have declared war upon the Doctor! After kidnapping Gabby and sending the Circle of Transcendence to destroy Aramuko, the Sentinels are intent on meddling in events to eradicate the Doctor from Time itself… But not all of the Sentinel collective approve of this plan. Aspect Blue (who had masqueraded as Noobis’ girlfriend, Siffhoni) has formulated a plan of his own – and has seeminly helped Gabby escape in the Red TARDIS. 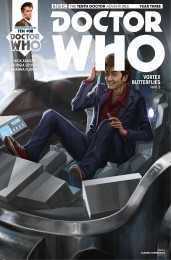 V9 Doctor Who: The Tenth Doctor

The Doctor is on the trail of a being he cannot yet understand – something that looks strangely familiar to him… but without his companions to guide him, could he become lost to its mystery? Meanwhile, in London, Gabby and Cindy have been taken under the wing of ex-companion Sarah Jane Smith! Could she be the key in solving Gabby’s unusual powers problems? 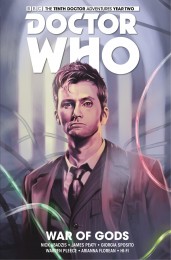 V7 Doctor Who: The Tenth Doctor

The epic conclusion of the Tenth Doctor’s second year of all-new adventures! On the impossible starship Shining Horizon, the ancient entity Sutekh has risen again – and this time, he’s brought some fearsome allies! Will the TARDIS team, along with Dorothy and Anubis, be able to stop them? Join the Doctor, Gabby, and Cindy for more adventures and battles against ancient gods! Superstar writers Nick Abadzis (Laika) and James Peaty (Supergirl), along with brilliant artists Giorgia Sposito (Wonderlan, Charmed) and Warren Pleece (The Great Unwashed), steer the TARDIS through this game-changing next chapter in the Doctor’s ongoing story! 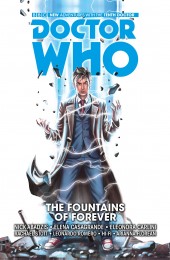 V3 Doctor Who: The Tenth Doctor

The Tenth Doctor and Gabby Gonzalez are back in New York – but there’s barely time for Gabby to catch up with her best friend Cindy Wu before a cosmic terror causes chaos across the city. When an aging Hollywood star is empowered by an extraterrestrial artefact, the Doctor, Gabby and Cindy are swept up in their biggest adventure yet! Writer Nick Abadzis (Laika) and artists Elena Casagrande (The X-Files, Angel), Eleonora Carlini (Grimm Tales of Terror), Rachael Stott (Star Trek/Planet of the Apes) and Leonardo Romero (Batman ’66) ramp up the stakes to universe-shattering levels. Collects Doctor Who: The Tenth Doctor #11-15 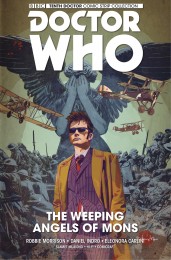 V2 Doctor Who: The Tenth Doctor

The Tenth Doctor and his new companion, Gabriella Gonzalez, take a terrifying trip into history, when a left turn in the Time Vortex strands them in the bomb-besieged trenches of World War I! And it’s not just the churning mud or the constant bombardments they have to worry about… the fearsome Weeping Angels are here and feasting on the futures of the soldiers on all sides! Superstar writer Robbie Morrison (Drowntwon, Nikolai Dante) and stunning artists Daniel Indro (Sherlock Holmes: Year One) and Eleonora Carlini (Grimm Tales of Terror) chart the horrifying next chapter in the Doctor’s ongoing story. Collects Doctor Who: The Tenth Doctor #6-10 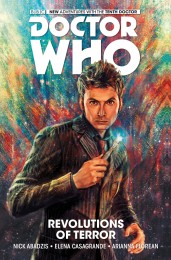 V1 Doctor Who: The Tenth Doctor

THE TRIUMPHANT FIRST COLLECTED EDITION OF THE ALL-NEW TENTH DOCTOR ONGOING!The Tenth Doctor thought he was done with new companions after Donna’s tragic exit – but that was before he met Gabriella ‘Gabby’ Gonzalez during an incursion of psychic parasites in Brooklyn, New York!Stuck running her father’s Laundromat, Gabby always dreamed of horizons beyond Sunset Park – whether that was going to college, making it as an artist, or just escaping her life for a while.Now she’s traveling the cosmos as the Doctor’s latest companion – and life couldn’t be more exciting! Battling invisible creatures on the Day of the Dead, uncovering a galactic conspiracy in the universe’s most famous art gallery... the only downside is the constant threat of death!Collects Doctor Who: The Tenth Doctor #1-5Doctor Who, the Daleks, the Cybermen, TARDIS and all other characters and logos are trade marks of the BBC and are used under licence unless otherwise indicated.