V.7 - Doctor Who: The Twelfth Doctor 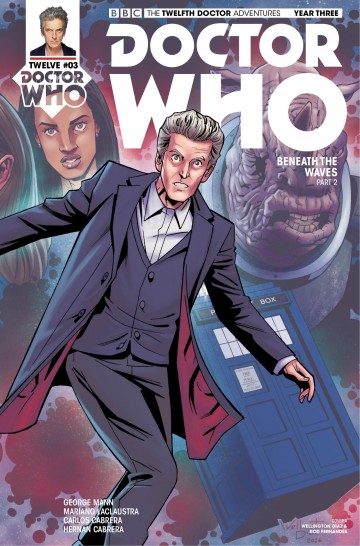 The Doctor revisited a previous adventure, where an entire town had been turned into zombie-like shells of their former selves, under the terrifying influence of a giant smile in the sky! Another enemy was defeated, with the help of the few unaffected locals – and a very brave, very lonely little boy. Now the Doctor must return his thoughts to a more pressing problem… the seaweed husk creatures attacking him and Hattie in a sleepy British seaside town! While a husk grapples with the Doctor, Hattie is pained by a psychic attack!

Read the album
Add to cart
Added to your cart
V.16 - Doctor Who: The Twelfth Doctor
(0)
$3.99
It's the 2015 Doctor Who Holiday Special! When a mysterious Christmas card materializes on the TARDIS console, Clara and the Doctor are pulled into an interdimensional adventure of astoundingly festive proportions! Packed with impossible sights and nigh-insurmountable stakes, this special issue also contains puzzles and games woven into the story!

Read the album
Add to cart
Added to your cart
V.5 - C.5 - Doctor Who: The Twelfth Doctor
(1)
$4.59
BETWEEN THE FUTURE AND THE PAST: HORROR!The Doctor and Clara and their allies are split between two time zones, as the clock counts down to the resurrection of the vengeful Kali! Will an ageless cult succeed where so many villains have failed? What chance does the Doctor have against a plan that has been in motion for thousands of years?Find out in the pulse-pounding finale of The Swords of Kali!Doctor Who, the Daleks, the Cybermen, TARDIS and all other characters and logos are trade marks of the BBC and are used under licence unless otherwise indicated.

Read the album
Add to cart
Added to your cart
V.1 - C.1 - Doctor Who: The Twelfth Doctor
(0)
$4.59
A tribute to women in comics & manga!
Enjoy adventures from a female perspective!

Read the album
Add to cart
Added to your cart
V.1 - Newbury & Hobbes
(0)
$13.99
A foul plot unfolds from the depths of London, as bombs rock the city, the dead rise, and Her Majesty is not amused! Discoer the dynamic detective duo Sir Maurice Newbury and Miss Veronica Hobbes, defenders of the Victorian Empire against threats both natural and supernatural. The HIT steampunk mystery novels unleash a new tale by original creator George Mann (‘Doctor Who’, ‘Dark Souls’) with irrepressible illustrations by Dan Boultwood (‘It Came!’, ‘The Phoenix’). Plus, exclusive Newbury & Hobbes prose story! Collects Newbury & Hobbes #1-4. “There is no doubting the talent on show in this book. Fans of Doctor Who or Holmes should find enough to quench their thirst.” – Comic Crusaders “Fans of Alan Moore’s work will enjoy Mann’s description of Victorian asylums, slums, aristocratic soirees and things that go bump in the night.” – Strange Horizons