Dune: Blood of the Sardaukar 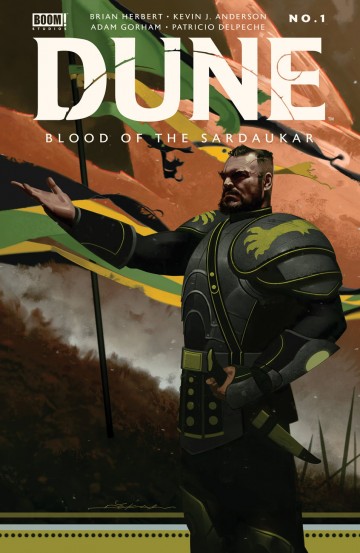 When the choice is vengeance or honor, which lies at the heart of a Sardaukar? Jopati Kolona one of the Sardaukar: the emperor's elite military unit. The Sardaukar are unbeatable, unbending in their devotion to the emperor, and feared throughout the galaxy. When Jopati meets Duke Leto of House Atreides, the house he believes responsible for the destruction of his home planet and family, he will be forced to question a life-long hatred. Tasked with overthrowing the Atreides stronghold on Dune for his master, Jopati will be forced to choose between duty and forgiveness.

Dune: Blood of the Sardaukar #1

This digital comic is available in english version. The following reading modes are available with the izneo reader:
Discover the 2021 Harvey Awards nominees!
Boys Run the Riot, Save It for Later & more!

Read the album
Pre-order
Added to your cart
Dune: House Atreides
(0)
$24.99
THE OFFICIAL PREQUEL TO THE GROUNDBREAKING DUNE CONTINUES... Leto Atreides brings news of the revolt brewing on Ix, but the city’s leaders make a decision that may threaten everyone, while Crown Prince Shaddam plots to overtake it. Meanwhile, Pardot Kynes begins spreading his edenic vision to terraform the desert planet of Dune into an oasis even as the native Fremen raise suspicions about his motives...and if he can truly accomplish his goals.
New