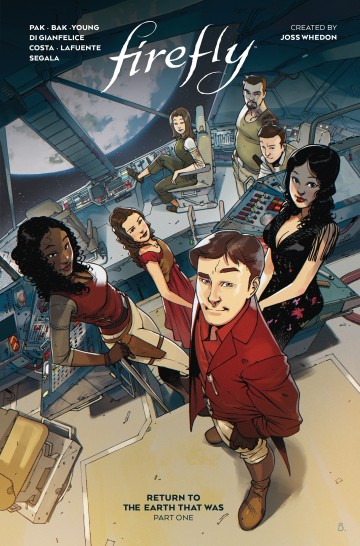 NEW CHARACTERS! NEW ENEMIES! A NEW ERA STARTS HERE! For the FIRST TIME, it’s the most-demanded Firefly story ever, as the series jumps forward in time after the battle with the Reavers that left Wash & Book dead. Serenity soars again, with Kaylee captaining a crew including River, Jayne and the bandit Leonard Chang-Benitez. But they’ll soon find themselves drawn into a shocking conflict that means Zoe - along with her toddler Emma - and old friends must rejoin the crew...except for Mal Reynolds. The superstar creative team of Greg Pak (Star Wars), Pius Bak and Ethan Young send Serenity off on the last mission they ever expected, one that will bring them to the EARTH THAT WAS for the first time in Firefly history!

This digital comic is available in english version. The following reading modes are available with the izneo reader:
Discover the 2021 Harvey Awards nominees!
Boys Run the Riot, Save It for Later & more!

Read the album
Add to cart
Added to your cart
C.33 - Firefly
(0)
$3.99
What happens when your worst enemy becomes your only ally? With her sights set on freeing Leonard, Kaylee’s team chases the Jefa across the Earth That Was only to be led directly into a trap. But everything changes when they get attacked by plunderer robos who have been tracking both groups… to exterminate them all. Now, Kaylee must team up with the Jefa in order to fend off the robos. But if they survive this, how will they survive each other?