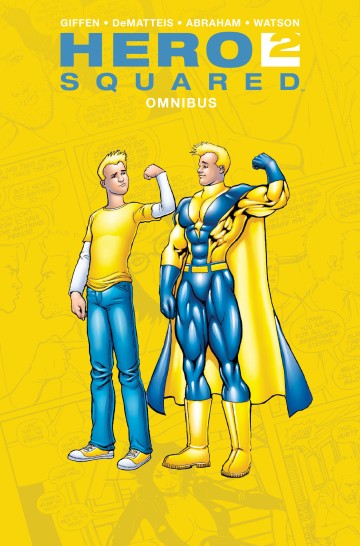 Milo's just another slacker in our world, but on a parallel universe, he's legendary superhero Captain Valor. When Valor is accidentally transported to our world, he moves in with Milo...but he didn't travel alone. His arch-nemesis Calignous is the alternate reality version of Milo's girlfriend Stephie, and there's an army of mutated penguins behind her! The entire saga from Eisner Award-winning creators Keith Giffen and J.M. DeMatteis (Justice League International) is fully collected for the first time, also including the tale of how Captain Valor's team was formed in the prelude series Planetary Brigade. One of comics' greatest teams brings you the caped laughs once more!

Hero Squared- Volume 1 - Hero Squared Omnibus - J.M. DeMatteis - to read online on izneo or download on your iOS and Android tablet or smartphone.

Read the album
Add to cart
Added to your cart
Moonshadow
(0)
$16.99
Known as America's first fully painted graphic novel, the poetic, philosophical, and groundbreaking Moonshadow gets a deluxe hardcover treatment, with a new introduction by writer J.M. DeMatteis and a new bonus section featuring concept art and early notes from the creative team. A romantic, unreliable narrator leads us through his interplanetary coming-of-age story, as an older Moonshadow recounts his strange mixed-species birth in outer space, his escape from a deep-space zoo, and his struggles to survive in a war-torn universe. With gorgeous watercolor artwork by Jon J Muth, this influential, timeless "fairy tale for adults" also includes the Farewell Moonshadow illustrated novella that gives fans a look at Moon's life after his tumultuous, space-faring teens and misadventures with the miscreant Ira. Digitally restored and including all original cover work, this volume also includes illustrations by Kent Williams and George Pratt and lettering by Kevin Nowlan. A sci-fi fantasy that Ray Bradbury called, "Beautiful, original, haunting," and DeMatteis himself calls "Dickens' David Copperfield meets Siddhartha in space."

Read the album
Add to cart
Added to your cart
Brooklyn Dreams
(1)
$9.99

Read the album
Add to cart
Added to your cart
Planetary Brigade
(0)
$7.99

Read the album
Add to cart
Added to your cart
TALENT: Deluxe Edition
(0)
$7.99

Read the album
Add to cart
Added to your cart
Jeremiah Harm
(0)
$4.99
Close