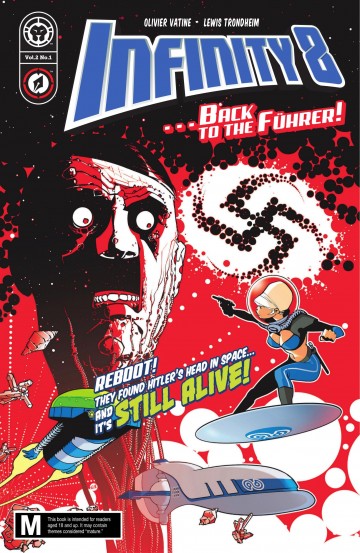 Special agent Stella Moonkicker is tasked with keeping the peace on board the Infinity 8 interstellar cruise liner, which is surprisingly easy with the peaceful, historical art society who has taken to the quaint philosophy of elegance and happiness perpetuated centuries ago by a mysterious group called "Nazis." Imagine how confused they are when the actual head of Adolf Hitler is found floating through space, only to be grafted onto a robot body in order to take violent control of this misguided army of simpletons in an attempt to take over the ship . . . The second arc in the eight-part space opera introduces new agent Stella Moonkicker, as well as other faces who will become more familiar as the mystery of the floating barricade of debris unfolds. Written by series co-creator Lewis Trondheim and illustrated by series co-creator and design director Olivier Vatine, this madcap—and often socially poignant—adventure captures the best of classic pulp sci-fi with a modern twist.

Read the album
Add to cart
Added to your cart
V.10 - Infinity 8
(0)
$3.99
The fourth arc in the eight-part space opera introduces Patty Stardust, an undercover agent sent to infiltrate a cult of free- spirited artists with an eye toward spectacle. Written by series co- creator Lewis Trondheim and fan-favorite writer Kris and illustrated by celebrated artist Martin Trystram, this trippy, sci-fi caper is as cool as it is hot!

Read the album
Add to cart
Added to your cart
C.8 - Infinity 8
(0)
$3.79
The third arc in the eight-part space opera introduces Marshal Emma O'Mara, an independent peace officer who also dedicates her life to the teachings of the Tholmanist space-church. When the Infinity 8 cruise ship is stopped by the mysterious floating barricade of debris, she sees an opportunity to retrieve a fabled, sacred artifact and uses her network of contacts in the criminal mercenary underworld to negotiate a plan to find it. But when you gather mercenaries with different agendas, things rarely go your way . . . there is no honor among thieves. Mix in a deadly bodyguard robot locked on its last set of unclear commands and the stakes reach a real life-or-death level . . . Written by series co-creator Lewis Trondheim and award-winning writer Fabian Vehlmann (Beautiful Darkness, Last Days of an Immortal), and illustrated by celebrated artist Olivier Balez, this sci-fi treasure hunt pits antihero vs antihero vs logic-driven robot in a caper that could unveil a secret so big, the universe itself could teeter on the brink of chaos!

Read the album
Add to cart
Added to your cart
Infinity 8 No. 11
(0)
$3.99
Cult leader Ron Digger has found a location for his next "event" -- a memorial to earth's 27 Club located in the debris field surrounding the ship, commemorating the Earth-born rockstars who died at the age of 27. But why there and what's his plan? And what has Patty found?

Read the album
Add to cart
Added to your cart
V.3 - Cosmonautes of the Future
(0)
$5.99
Following an apocalyptic attack at the hands of space vampires in volume two, Gildas and Martina are back for more intergalactic adventures. This time, their spaceship carries them to an outer space museum, built entirely in their honor, which also happens to be the symbol of the all-powerful Celta movement. Just the kind of symbol that the resistance would love to blow to smithereens, as our space heroes are about to find out...

Read the album
Add to cart
Added to your cart
V.2 - Cosmonautes of the Future
(0)
$5.99
eazyComics