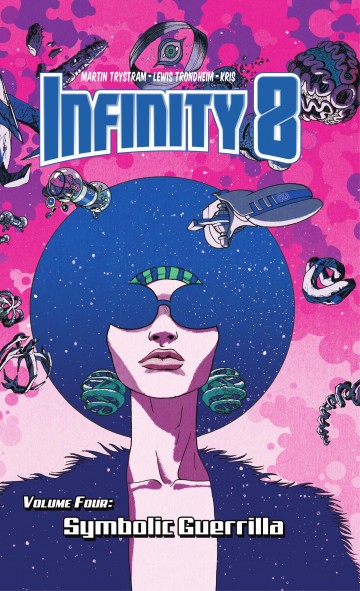 The city-sized, deep-space cruise ship "Infinity 8" stops halfway en route between the Milky Way and Andromeda, blocked by a massive field of debris containing wreckage and artifacts from countless planets, cultures, and possibly dimensions. The captain of the ship calls upon eight of the ship's top security to investigate the anomaly, each one sent out in a parallel time loop to collect information which can then be assembled to hopefully discover the truth before disaster erupts. Each time loop lasts only eight hours, at which point things snap back to the way they were when they started, leaving the agents with no memories of their time in that window. Can the eight agents solve the mystery without making things worse? Danger reveals itself within the interspecies population on the ship, some of whom may know more than they lead on . . . The fourth arc in the eight-part space opera introduces Patty Stardust, an undercover agent sent to infiltrate a cult of free-spirited artists with an eye toward spectacle. Written by series co-creator Lewis Trondheim and fan- favorite writer Kris and illustrated by celebrated artist Martin Trystram, this trippy, sci-fi caper is as cool as it is hot!

Read the album
Add to cart
Added to your cart
V.10 - Infinity 8
(0)
$3.99
The fourth arc in the eight-part space opera introduces Patty Stardust, an undercover agent sent to infiltrate a cult of free- spirited artists with an eye toward spectacle. Written by series co- creator Lewis Trondheim and fan-favorite writer Kris and illustrated by celebrated artist Martin Trystram, this trippy, sci-fi caper is as cool as it is hot!

Read the album
Add to cart
Added to your cart
C.8 - Infinity 8
(0)
$3.79
The third arc in the eight-part space opera introduces Marshal Emma O'Mara, an independent peace officer who also dedicates her life to the teachings of the Tholmanist space-church. When the Infinity 8 cruise ship is stopped by the mysterious floating barricade of debris, she sees an opportunity to retrieve a fabled, sacred artifact and uses her network of contacts in the criminal mercenary underworld to negotiate a plan to find it. But when you gather mercenaries with different agendas, things rarely go your way . . . there is no honor among thieves. Mix in a deadly bodyguard robot locked on its last set of unclear commands and the stakes reach a real life-or-death level . . . Written by series co-creator Lewis Trondheim and award-winning writer Fabian Vehlmann (Beautiful Darkness, Last Days of an Immortal), and illustrated by celebrated artist Olivier Balez, this sci-fi treasure hunt pits antihero vs antihero vs logic-driven robot in a caper that could unveil a secret so big, the universe itself could teeter on the brink of chaos!

Read the album
Add to cart
Added to your cart
Infinity 8 No. 11
(0)
$3.99
Cult leader Ron Digger has found a location for his next "event" -- a memorial to earth's 27 Club located in the debris field surrounding the ship, commemorating the Earth-born rockstars who died at the age of 27. But why there and what's his plan? And what has Patty found?
#StayAtHome