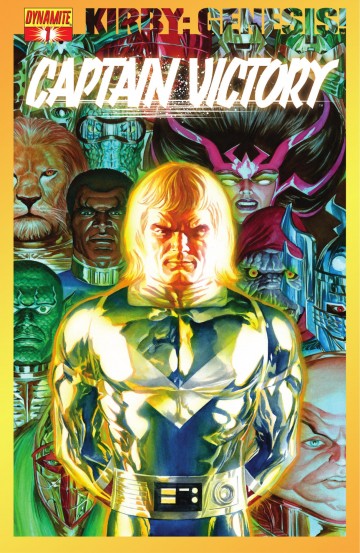 The enigmatic soldier known as Captain Victory leads an elite group of intergalactic rangers through the mysterious and deadly cosmos, fighting against forces set on the destruction of life, itself! But who is this man, and what does he want? This special introductory issue written by Sterling Gates and drawn by Wagner Reis starts with a bang, as the deadliest battle Captain Victory and his men have ever fought begins!

This digital comic is available in english version. The following reading modes are available with the izneo reader:
Kirby: Genesis- Volume 1 - Kirby: Genesis - Captain Victory Vol. 1 #1 - Sterling Gates - to read online on izneo or download on your iOS and Android tablet or smartphone.

Read the album
Add to cart
Added to your cart
V.1 - C.6 - Kirby: Genesis
(0)
$1.99 $0.99
Following the disaster of Ilili, Captain Victory and his crew race back to Ranger Center to confront the traitor in their midst! But the traitor's got a secret weapon of his own aboard the Dreadnaught Tiger, a sleeper agent activated if Victory ever discovered what was really happening within the Galactic Command. Victory is forced to fight one of his own as Tiger 20 attacks!