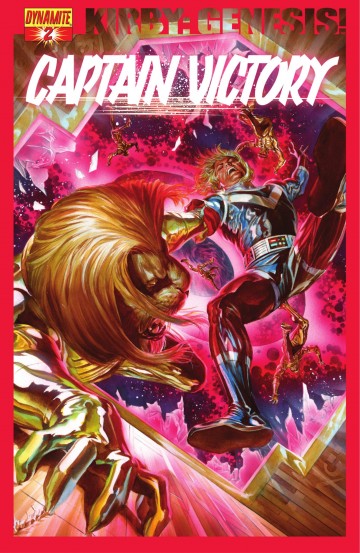 Jack Kirby's epic space opera continues! Last issue, Captain Victory was forced to make a terrible choice in order to stop the malicious Batteron. Now that decision comes back to haunt him as several members of his crew plot mutiny. As tempers flare, however, the ship is attacked by the Eye of Blackmass, punching a hole in the ship's hull that threatens to kill everyone aboard! Is it still mutiny if Captain Victory is dead? Plus, the secret origin of everyone's favorite lion-man, Tarin!

This digital comic is available in english version. The following reading modes are available with the izneo reader:
Kirby: Genesis- Volume 1 - Kirby: Genesis - Captain Victory Vol. 1 #2 - Sterling Gates - to read online on izneo or download on your iOS and Android tablet or smartphone.

Read the album
Add to cart
Added to your cart
V.1 - C.6 - Kirby: Genesis
(0)
$1.99
Following the disaster of Ilili, Captain Victory and his crew race back to Ranger Center to confront the traitor in their midst! But the traitor's got a secret weapon of his own aboard the Dreadnaught Tiger, a sleeper agent activated if Victory ever discovered what was really happening within the Galactic Command. Victory is forced to fight one of his own as Tiger 20 attacks!