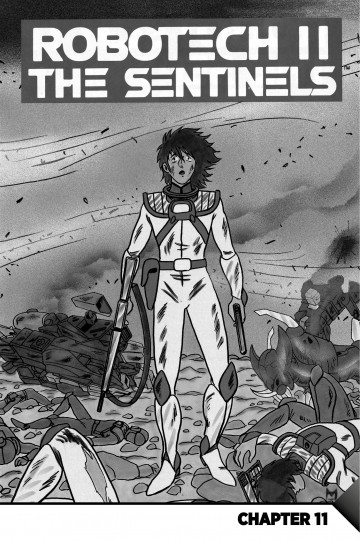 Ten years have passed since the end of the first Robotech war which almost destroyed Earth. Now General Rick Hunter is heading out in the new flagship SDF-3 on the most important mission of his life… Together with his intrepid crew, including alien warrior Breetai, fiancé Admiral Lisa Hayes, and ex-girlfriend Lynn Minmei, Hunter must travel to Tirol, the homeworld of the legendary Robotech Masters, and attempt to open up diplomatic relations. There he finds a world devastated by a far more deadly threat, the Invid, a ruthless alien race hellbent on seizing the secret of Protoculture, the power source behind all the Robotechnology. Collecting together the complete Robotech II: The Sentinels Book One (#1-16, plus the two Wedding Specials), originally from 1988-1990. This massive 464-page volume includes never before seen sketches and a new foreword written by John and Jason Waltrip.

Read the album
Add to cart
Added to your cart
V.6 - Robotech
(0)
$4.59
Several years ago, a mysterious space-ship crashed on Macross Island… In the intervening years, the people of Earth used the ‘Robotechnology’ from the ship to significantly advance their own technology. The ship – named by the humans as the Super-Dimension Fortress – actually belonged to a race of giant aliens, the Zentraedi the crew of the SDF-1 were forced to space-fold away – taking a chunk of Macross City (and its 70,000 citizens) with them. And then, the long journey home began – with the Zentraedi being a constant, deadly threat along the way. On the journey, the SDF-1’s Captain Gloval, died and Lisa Hayes took over his position. Rick Hunter went blind, but developed a different kind of vision connected to the Protoculture that powers Robotechnology. Minmei was also affected and developed powerful abilities through her voice. Lazlo Zand kidnapped Roy and held him captive, and with a cloning chamber he found on the original crashed SDF-1, Zand created clones of Roy and Gloval. A devastating all-out war broke out between the Zentraedi Dolza and the humans of Earth – with massive casualties on both sides – while a small group of Zentraedi aliens defected to the SDF-1. Dolza was eventually defeated and peace seemed to return… But the story is far from over. The Invid are becoming a huge threat and it emerges that a life-support chamber had dropped into the ocean when the SDF-1 originally crashed into Macross Island. The chamber contains a young female…

Read the album
Add to cart
Added to your cart
V.4 - C.1 - Robotech
(1)
$4.59
Ten years ago, a mysterious ship crashed on Macross Island… In the intervening years, the people of Earth have used the ‘Robtechnology’ from the ship to significantly advance their own technology. The ship – named by the humans as the Super-Dimension Fortress – actually belongs to a race of giant aliens, the Zentraedi. The Zentraedi attack and the crew of the SDF-1 are forced to space-fold away – taking a chunk of Macross City with them. The SDF-1 has been in the midst of a long journey back to Earth. On the journey, the SDF-1’s Captain, Henry Gloval, was killed under mysterious circumstances and Lisa Hayes took over his position… Claudia has evidence linking her partner Roy to Gloval’s death. The Vermillion Squad – Rick, Max and Ben – plus Lisa and Kramer, were taken prisoner aboard the Zentraedi flagship and interrogated by the aliens. They escaped but Ben was slain by Miriya. Rick appears to have gone blind, but has somehow developed a different kind of vision – possibly connected to Robotechnology. The SDF-1 recently received a message from Earth – telling them to stay away… And then Roy Fokker was shot… by himself?

Read the album
Add to cart
Added to your cart
Robotech - Volume 4 - Chapter 2
(0)
$4.59
The people of Earth have been led to believe that the SDF-1 has been destroyed. Earth’s leaders don’t want the populace to panic about the emergence of the Zentraedi, and they also believe that the SDF-1’s presence is a danger to Earth. After an attack in Earth’s orbit by the Zentraedi, Earth’s leaders prepare to take drastic measures – involving “Project: Grand Cannon”… Meanwhile, Zentraedi spies Bron, Rico, and Konda are aboard the SDF-1, and Azonia and Khyron continue to scheme against Breetai… Also, a deadly version of Roy is causing trouble on the SDF-1, while the real Roy has been taken prisoner by Dr Lazlo Zand who promises to reveal secrets of the SDF-1’s history.
Close