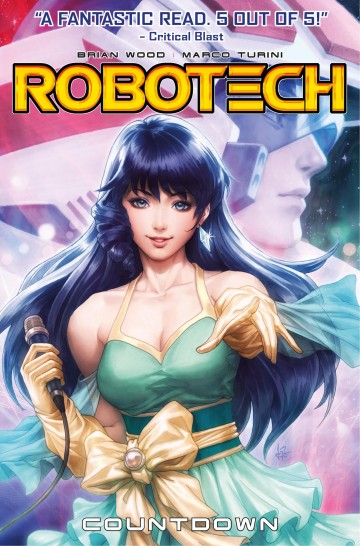 Titan Comics proudly presents a bold new vision for the classic Robotech saga! A mysterious ship crashes on a remote island… 10 years later, the ship’s ‘Robotechnology’ has helped humanity advance its own tech. But danger looms from the skies and an epic adventure is set to begin… Written by Brian Wood (Star War, Briggs Land, X-Men) with stunning art by Marco Turini (Heavy Metal, Assassin’s Creed), and a special introduction by Greg Finely who voiced Gloval in the original animated series. Collects Robotech #1-4 “A perfect introduction for a new generation!” – CBR “A great reboot for a great franchise. The 16-year-old me who bought those DC Robotech issues back in 1985 would approve. 5 out of 5” – Nerdly

This digital comic is available in english version. The following reading modes are available with the izneo reader:
Robotech- Volume 1 - Robotech - Volume 1 - Countdown - Brian Wood - to read online on izneo or download on your iOS and Android tablet or smartphone.

Read the album
Add to cart
Added to your cart
V.1 - Robotech
(1)
$13.99
Robotech- Volume 1 - Robotech - Volume 1 - Countdown - Brian Wood - to read online on izneo or download on your iOS and Android tablet or smartphone.

Read the album
Add to cart
Added to your cart
C.1 - Robotech
(0)
$3.99
Robotech- Volume 1 - Robotech - Volume 1 - Countdown - Brian Wood - to read online on izneo or download on your iOS and Android tablet or smartphone.

Read the album
Add to cart
Added to your cart
Robotech - Robotech Archives - Volume 4 - Sentinels Vol.1
(0)
$29.99
Ten years have passed since the end of the first Robotech war which almost destroyed Earth. Now General Rick Hunter is heading out in the new flagship SDF-3 on the most important mission of his life… Together with his intrepid crew, including alien warrior Breetai, fiancé Admiral Lisa Hayes, and ex-girlfriend Lynn Minmei, Hunter must travel to Tirol, the homeworld of the legendary Robotech Masters, and attempt to open up diplomatic relations. There he finds a world devastated by a far more deadly threat, the Invid, a ruthless alien race hellbent on seizing the secret of Protoculture, the power source behind all the Robotechnology. Collecting together the complete Robotech II: The Sentinels Book One (#1-16, plus the two Wedding Specials), originally from 1988-1990. This massive 464-page volume includes never before seen sketches and a new foreword written by John and Jason Waltrip.
Want them to read?
Give them comics!

Robotech- Volume 1 - Robotech - Volume 1 - Countdown - Brian Wood - to read online on izneo or download on your iOS and Android tablet or smartphone.

Read the album
Add to cart
Added to your cart
V.3 - Sword Daughter
(1)
$11.99
A father and daughter carve their way across Europe to complete their revenge against the dwindling clan of Vikings that destroyed their lives so many years ago. Elsbeth Dagsdottir has not forgotten the oath her father made to her on that remote Icelandic beach: to deliver revenge upon the Forty Swords clan that burned their village and murdered her mother. It might take them a lifetime of struggle and suffering and loss, but a promise is a promise. Created by Brian Wood (Northlanders, The Massive, DMZ) and Mack Chater (Briggs Land, Lazarus), Sword Daughter is a visually stunning, emotionally poignant story of parental guilt and acceptance of loss. Collects Sword Daughter issues #7-#9.

Read the album
Add to cart
Added to your cart
RoboCop: Citizens Arrest
(0)
$15.99