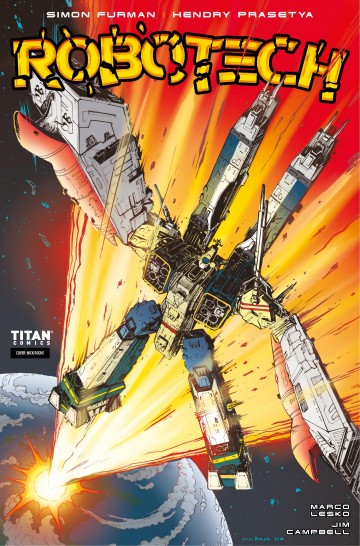 The SDF-1 has been in the midst of a long journey back to Earth. Along the way, the SDF-1’s Captain, Henry Gloval, was killed under mysterious circumstances and Lisa Hayes took over his position… Rick appears to have gone blind, but has somehow developed a different kind of vision – possibly connected to the Protoculture that powers Robotechnology. He is now concerned that Minmei has also been affected. It emerges that Earth’s leaders had told the populace that the SDF-1 had been destroyed, in order to avoid panic about the threat of the Zentraedi. Lisa Hayes has been trying to persuade Earth’s leaders (including her own father) to let them return home, to little avail… Sonia Trudeau from the Free-State Government of the Ontario Quadrant has offered safe harbour for the SDF-1. Earth’s Joint Chiefs have been preparing their own powerful defences against a potential Zentraedi attack… Minmei and Rick brought Minmei’s cousin, Kyle, from Aluce Base to the SDF-1, and Miriya took revenge on Max Sterling by attacking him in space. The fight led to Miriya crashing into the SDF-1, in the middle of Macross City there… Meanwhile, Roy is being held prisoner by Dr Lazlo Zand, one of the first scientists to originally board the SDF-1. A deadly clone of Roy is doing Zand’s bidding on the SDF-1, including murdering TR Edwards, who know the secrets of the SDF-1 (along with Zand). Knowing that the SDF-1 will be attacked if it returns to Earth, Zand unleashes three Invid warriors on Macross City as a distraction.

This digital comic is available in english version. The following reading modes are available with the izneo reader:
Robotech- Volume 1 - Robotech - Volume 4 - Chapter 4 - Simon Furman - to read online on izneo or download on your iOS and Android tablet or smartphone.

Read the album
Add to cart
Added to your cart
V.1 - Robotech
(1)
$13.99
Robotech- Volume 1 - Robotech - Volume 4 - Chapter 4 - Simon Furman - to read online on izneo or download on your iOS and Android tablet or smartphone.

Read the album
Add to cart
Added to your cart
C.1 - Robotech
(0)
$3.99
Robotech- Volume 1 - Robotech - Volume 4 - Chapter 4 - Simon Furman - to read online on izneo or download on your iOS and Android tablet or smartphone.

Read the album
Add to cart
Added to your cart
Robotech - Robotech Archives - Volume 4 - Sentinels Vol.1
(0)
$29.99
Ten years have passed since the end of the first Robotech war which almost destroyed Earth. Now General Rick Hunter is heading out in the new flagship SDF-3 on the most important mission of his life… Together with his intrepid crew, including alien warrior Breetai, fiancé Admiral Lisa Hayes, and ex-girlfriend Lynn Minmei, Hunter must travel to Tirol, the homeworld of the legendary Robotech Masters, and attempt to open up diplomatic relations. There he finds a world devastated by a far more deadly threat, the Invid, a ruthless alien race hellbent on seizing the secret of Protoculture, the power source behind all the Robotechnology. Collecting together the complete Robotech II: The Sentinels Book One (#1-16, plus the two Wedding Specials), originally from 1988-1990. This massive 464-page volume includes never before seen sketches and a new foreword written by John and Jason Waltrip.
Become a super reader
Write reviews and get comics for free!

Robotech- Volume 1 - Robotech - Volume 4 - Chapter 4 - Simon Furman - to read online on izneo or download on your iOS and Android tablet or smartphone.