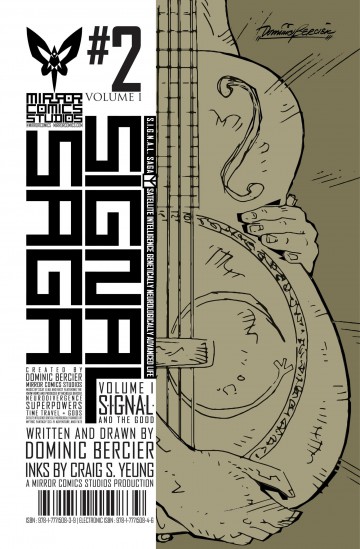 Lightning! When Adam David III meets Ash Codec, their hidden chaos powers of light and dark cause a lightning bolt to emerge from the top The Monarch Club, on a bright and sunny day, resulting in the blackout of the entire north eastern grid. The jolt electrifies Ash, whilst Adam, recovering on the floor, is not so jazzed. But Ash is adamant, and immediately hires Adam to play that night. Adam acquiesces, confused about the handshake and power outage. But, that night, after playing a set which includes on one of his songs, playing guitar by candlelight, Adam begins to believe that things do happen for a reason after all, as he meets her… Tyana PanGaea, a.k.a. Radio, Ash’s adopted sister. An altogether different kind of lightning strikes then.

This digital comic is available in english version. The following reading modes are available with the izneo reader:
SIGNAL Saga- Volume 1 - Never Fall - Dominic Bercier - to read online on izneo or download on your iOS and Android tablet or smartphone.

Read the album
Add to cart
Added to your cart
V.1 - C.1 - SIGNAL Saga
(1)
$1.29
SIGNAL Saga- Volume 1 - Never Fall - Dominic Bercier - to read online on izneo or download on your iOS and Android tablet or smartphone.

SIGNAL Saga- Volume 1 - Never Fall - Dominic Bercier - to read online on izneo or download on your iOS and Android tablet or smartphone.