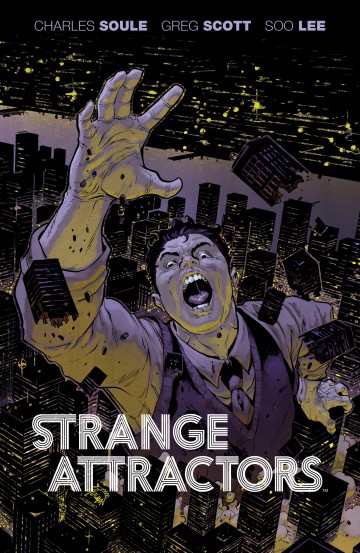 Writer Charles Soule (Daredevil, Poe Dameron) and illustrator Greg Scott come together for a science-fiction tale of the ties that bind New York City. Dr. Spencer Brownfield, a disgraced former professor, believes a series of cataclysmic events are coming to New York City, and someone has to keep the city safe after he's gone. Enter Heller Wilson, a brilliant mathematics student who discovers that his ailing"”perhaps insane"”mentor has been saving New York City from societal collapse by a series of "adjustments," a la the butterfly effect. But now, all signs point toward an impending disaster. Can Wilson take what little he's learned and save the city in time? Collects the complete series. Includes the never-before collected short story "Antithesis," illustrated by Soo Lee (Liquid City). "...a fascinating well-researched look beyond the concrete..." - Newsarama

Read the album
Add to cart
Added to your cart
V.5 - Strange Attractors
(0)
$1.99
Final issue! Brilliant mathematics student Heller Wilson finds his true calling when he starts connecting with his fellow New Yorkers in a daring attempt to save New York City from a series of catastrophic events.