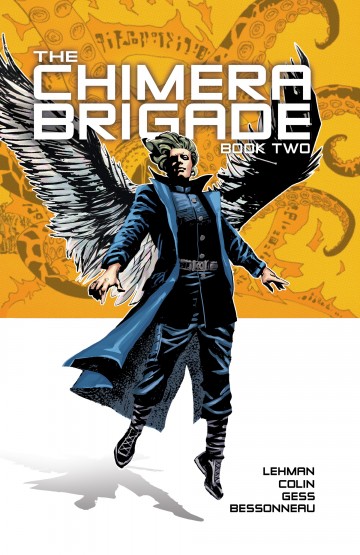 In the trenches of World War 1, a new kind of superhuman was born. Formed by secret and illegal chemical weapons, this empowered generation is just starting to come of age. Some fight against injustice, others spread terror. Now, in 1938, on the eve of War, they have risen to take control of the capital cities of Europe. Above the law, above human authority, these strange metahumans capture the imaginations of the public even as they baffle scientists with their impossible powers. The battles between them are titanic, legendary, and larger than life. But a new, even more powerful threat is looming, one that could yet erase them from existence and shift the balance of power, as Europe becomes a battle-ground for different political and ideological factions. It is a time that tests allegiances and forges new alliances. This is how the superhumans of Europe were born… and this is how they died.

This digital comic is available in english version. The following reading modes are available with the izneo reader:
The Chimera Brigade- Volume 2 - volume 2 - Fabrice Colin - to read online on izneo or download on your iOS and Android tablet or smartphone.

Read the album
Add to cart
Added to your cart
V.3 - The Chimera Brigade
(0)
$6.59
Venture inside the Burning Chamber! Mythical beings have risen to power across Europe, and super-human activity is increasing around the globe! War threatens to devastate the world once more as the manipulative M. plans to abuse the power of superscience. But hope is not lost! Doctor Jean Séverac embodies a unique force: a force that could save the world – if he can embrace his surprising identity!

Read the album
Add to cart
Added to your cart
C.3 - The Chimera Brigade
(0)
$3.99
With the cockroach captured, and Missenbrauch's evil plans unveiled, will Marie Curie's daughter be able to band the superhumans together in order to stop another World War? It all now rests on the shoulders of the Man Who Walks Through Walls....

Read the album
Add to cart
Added to your cart
C.1 - The Chimera Brigade
(0)
$3.99
Have you read the comics?
The Umbrella Academy, Dune...

The Chimera Brigade- Volume 2 - volume 2 - Fabrice Colin - to read online on izneo or download on your iOS and Android tablet or smartphone.

Read the album
Add to cart
Added to your cart
V.1 - The Season of the Snake
(1)
$6.59
A thought-provoking journey into humanity's origins and unbound potential in the Universe. Intersection 55 is the gateway to the Universe. Over the years, its builders, the Mohais, have learned to live by a strict moral code to ensure the smooth running of their ancestral responsibilities. But something is awakening... and the Snake is about to shatter the foundations of this world forever!