V.1 - The Kingdom of the Blind 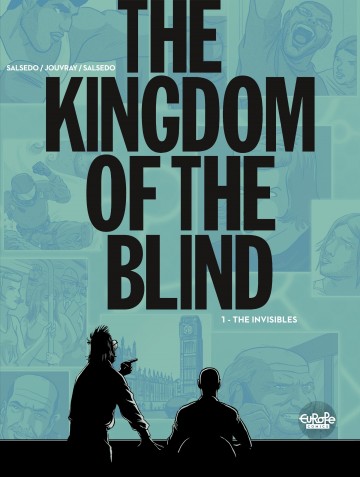 "The Kingdom of the Blind, vol 1 is written by Olivier Jouvray, the artwork is done by Frédérik Salsedo, with Greg Salsedo as colorist. It's a story set in the future. A young woman is involved with a group that's opposed to the government and it's surveillance, she gets caught during a mission and her brother sets out to find her. I really liked this book. The plot is inventive and the storytelling is very effective. What starts out as a simple battle between an oppressive government and an opposition group turns into something more intricate as the story progresses, with a big plot twist at the very end. The writer explains this world and it's characters with a very light touch, he dispenses the necessary information evenly throughout the book in a way that lets the story move along at a brisk pace. I was a bit sceptical of the artwork when I first started reading, but I soon became a fan of it. The style is very fluid and unpredictable. You can never quite pin it down, and that makes it interesting. I'm sure a lot of people would prefer a more realistic approach for a story like this, but I think the art works very well. It sets the book apart and gives it a specific tone. Together with the skillful writing it creates a book that's well worth checking out."

Our society at some point in the future. Under mass surveillance. The majority prefer it that way. Living under the illusion of democracy. A group of revolutionary “lefties”, amongst whom Laurette, proceed to blow servers up to fight the system they find so oppressing. Things don’t quite go as planned, and Laurette is abducted by an underground group, secretive and way more efficient. Their targets: the usage of the huge amount of data available out there by the Government, police forces and private business groups to hide a massive network of corruption and to serve the pillage of resources by the wealthiest. Their goal: restoring a sane order. While Laurette’s brother is recruited by the police forces, her father, an ex-cop, does not seem as remotely detached as first thought. “Nobody is as blind as those who think they see all”. This series in three volumes, by Olivier Jouvray and Frédérik Salsedo, addresses a very modern dilemma : concern for privacy and individual freedom on the one hand, security and big data on the other. In the (blurry) middle of all of this, corrupt politicians and turncoat law enforcement officers. A pleasant first volume for the whole family, easy to read and understand, with some humour, loyalty and real baddies.

The era of privacy is over. With the proliferation of cameras, social networks, and automated surveillance systems, everyone is being watched at all times and people have begun to give in to the surveillance state. Well, almost everyone... Laurette is a young, rebellious teenager in London plotting an attack on a major government data center with a group of activists. But when the plan goes wrong, Laurette disappears, kidnapped by unknown agents. Dissatisfied with the police's lack of progress, Adil, Laurette's brother, decides to investigate on his own. A science-fiction story that explores a future not too far from our own, tackling the issue of surveillance from both sides of the law.

Read the album
Add to cart
Added to your cart
V.3 - The Kingdom of the Blind
(2)
$5.99
London, 2060. Two years after the "Invisibles" underground terrorist group was caught, Laurette and Adil have taken on new lives. However, the events of the past catch up to them when a colleague of their father, Francis—the mastermind behind the terrorist group—reaches out, determined to make Francis answer for the way he betrayed the group for personal gain. As Laurette and Adil come to terms with the implications of their father's actions, the situation spins exceedingly out of control... Who will come out on top?

Read the album
Add to cart
Added to your cart
V.1 - The Kingdom of the Blind
(2)
$5.99
A tribute to women in comics & manga!
Enjoy adventures from a female perspective!