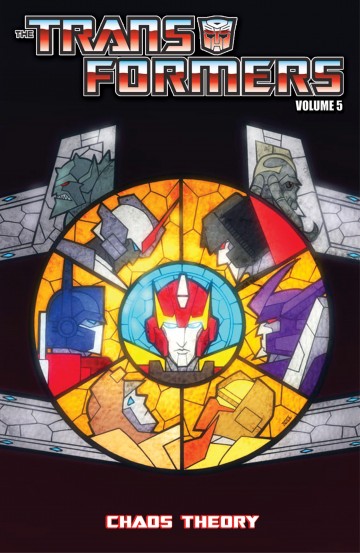 The fate of Rodimus and the Matrix of Leadership is finally revealed in this newest story arc of Transformers, "Chaos Theory." The situation on Earth continues to deteriorate while we shift focus to outer space where Rodimus was last seen dead! But, after crash landing on a strange planet, Rodimus struggles to find a way back to Earth and the Autobot forces... until a few familiar faces show up to help and a new threat to Cybertron is revealed!

This digital comic is available in english version. The following reading modes are available with the izneo reader:
Transformers- Volume 5 - Transformers Vol. 5 - Chaos Theory - Mike Costa - to read online on izneo or download on your iOS and Android tablet or smartphone.

Read the album
Add to cart
Added to your cart
V.10 - Transformers
(0)
$13.99
ALL HAIL OPTIMUS! Backed by an army of zealous followers, OPTIMUS PRIME declares Earth to be a part of CYBERTRON’S Council of Worlds—but the DECEPTICONS and the people of Earth won’t take it lying down! Collects issues #50–55.

Read the album
Add to cart
Added to your cart
V.1 - Transformers
(1)
$13.99
A tribute to women in comics & manga!
Enjoy adventures from a female perspective!

Transformers- Volume 5 - Transformers Vol. 5 - Chaos Theory - Mike Costa - to read online on izneo or download on your iOS and Android tablet or smartphone.

Read the album
G.I. Joe: Cobra - Oktober Guard
(0)
Who is the OKTOBER GUARD? The deadliest group of elite killers and assassins ever faced by G.I. JOE or COBRA! But with the main G.I. JOE force focused on tracking down SNAKE EYES, it’s all up to FLINT and the covert G.I. JOE squad to step in—and take them down! Collects COBRA Issues #17–21.