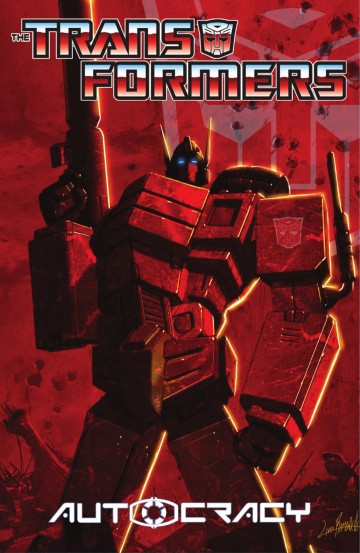 The full collected edition! Before Optimus became a Prime... he fought for order. Before MEGATRON became a conquerer... he fought for freedom. Before they were enemies... they stood against—Autocracy. Writers Chris Metzen (World of Warcraft) and Flint Dille (original TRANSFORMERS animated series) are joined by artist Livio Ramondelli (TRANSFORMERS: Chaos) to bring you an IDW comics event five million years in the making. Includes a COVER GALLERY showcasing the breathtaking imagery of AUTOCRACY!

Read the album
Add to cart
Added to your cart
V.2 - Transformers (2019-)
(0)
$19.99
A bold new era dawns in this fresh vision of the Transformers universe that will excite longtime fans and new readers alike! Orion Pax, Chromia, and Security Operations have almost cracked the case of the Rise terrorists who killed Brainstorm and Rubble. But they aren't the only ones worried about the Rise, and with a bolder Ascenticon faction behind them, Megatron, Starscream, and Soundwave seek to save Cybertron from all threats–the Rise, the Nominus Edict, and the Autobots! Collects Transformers #13–18 and Transformers: Galaxies #1–6!

Read the album
Transformers: Redemption of the Dinobots
(0)