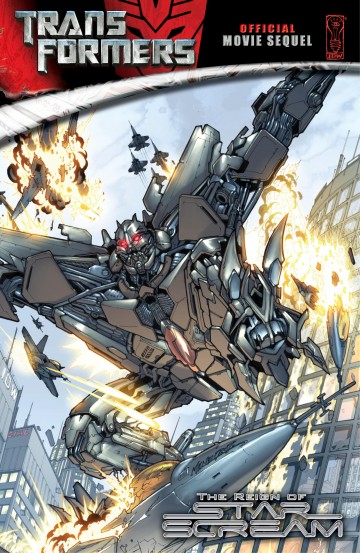 The official continuation of the first blockbuster TRANSFORMERS movie is here! When MEGATRON falls in battle, STARSCREAM assumes the role of DECEPTICON leader on Earth. Mustering his surviving allies, he sets out to put his own plan in motion. But before he can do that, he’ll need to retrieve a fallen comrade, carry out a plan of revenge, and leave the Earth to meet up with a major player in the DECEPTICON army. Picking up where the film ended, “The Reign of Starscream” also reveals the fates of other surviving film characters, as co-writers Chris Ryall (Transformers Movie Prequel) and Chris Mowry present a tale of intrigue, betrayal, and dark ambition featuring both old and all-new TRANSFORMERS characters.

Read the album
Add to cart
Added to your cart
V.3 - Transformers: Lost Light
(0)
$9.99
Crammed into a dead Decepticon astropod that's 10 sizes too small, the displaced crew of the Lost Light faces their most serious threat yet: each other. No worries though, Rodimus can save the day! Or maybe they’ll all die... Plus, the Scavengers have never had it so good. The war is a receding memory, their patchy service records have been forgotten, and the five of them can roam the galaxy as they please. All's well that ends well? Not quite. Collects issues #13–18.

Read the album
Add to cart
Added to your cart
Transformers: Unicron
(0)
$9.49

Read the album
V.2 - Transformers: More Than Meets the Eye
(0)

Read the album
V.3 - Transformers: More Than Meets the Eye
(0)

Read the album
Transformers: Alliance - The Revenge of the Fallen Movie Prequel
(0)

Read the album
V.4 - Transformers: More Than Meets the Eye
(0)

Read the album
Transformers: Tales of the Fallen
(0)