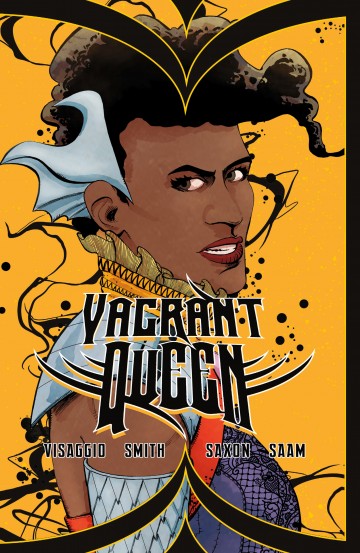 Child-queen-turned-space-smuggler Elida Al Feyr has finally built something resembling a happy life. Then a mysterious stranger in an ancient white ship shows up to smash it all to bits. Meanwhile, Isaac is still stuck out there in space. THEY TOOK HER KINGDOM. SHE TOLD THEM TO KEEP IT. Everyone’s favorite deposed-child-queen-turned-marauder, Elida Al-feyr is back! And she’s finally managed to build a happy life...until a mysterious man in an ancient white ship shows up and takes it all away. And yes, the lone canuck in space is still out there, somewhere. Collects the complete five issue series.

This digital comic is available in english version. The following reading modes are available with the izneo reader:
Vagrant Queen- Volume 2 - Vagrant Queen Vol. 2 - Magdalene Visaggio - to read online on izneo or download on your iOS and Android tablet or smartphone.

Read the album
Add to cart
Added to your cart
Vagrant Queen Vol. 1
(0)
$7.99
Eldaya was a child queen until an absurd revolution overthrew her dynasty. Now Elida is a smuggler, evading the farcical republic that wants her dead. When a frenemy claims to know where to find her long lost mother, Elida stages a rescue. THEY TOOK HER KINGDOM. SHE TOLD THEM TO KEEP IT. Former child queen Elida was driven from her throne at age ten and forced to wander the galaxy, evading the revolutionary forces that wanted her dead. When an old frenemy claims to know the whereabouts of Elida’s long-lost mother, she is forced to return to her former kingdom and stage a rescue. Collects the complete five issue series.
Want them to read?
Give them comics!

Vagrant Queen- Volume 2 - Vagrant Queen Vol. 2 - Magdalene Visaggio - to read online on izneo or download on your iOS and Android tablet or smartphone.

Read the album
Add to cart
Added to your cart
C.8 - Strangelands
(0)
$3.99
Opposites attract? Elakshi and Adam Land aren’t married. In fact, a month ago, they were perfect strangers, dwelling in lands foreign to one another. But now, they’re forced to remain by one another’s side, for their separation could mean the planet’s demise. Their greatest challenge is to stay together — even if they have to tear the world apart to do so.

Read the album
Add to cart
Added to your cart
Transformers vs. The Visionaries
(0)
$9.49
Close