A&A: The Adventures of Archer & Armstrong 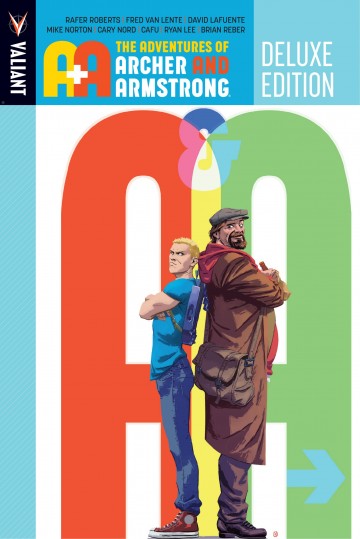 Join Harvey Award-nominated writer Rafer Roberts (HARBINGER RENEGADE) and superstar artists David Lafuente (Ultimate Spider-Man) and Mike Norton (Revival) as they take Valiant's (somewhat) dynamic duo on an all-out assault on the senses right here in the complete deluxe edition hardcover of the series The A.V. Club calls ""some of the most bold, original work in all of superhero comics right now..."" Meet Armstrong: Since the ancient city of Ur, this immortal adventurer has spent the last 7,000 years drinking and carousing his way through history alongside some of the greatest merrymakers the world has ever known. Meet Archer: A sheltered teenage martial arts master and expert marksman that was raised for a single purpose – to kill the devil incarnate. Little did he know that this undying evil was actually Armstrong (he's actually a pretty good guy… once you get to know him) and, since hitting the road together, the two have become great friends and even better partners. Now: Archer is about to set off on his most dangerous mission yet – a quest into the mystic reaches of Armstrong's bottomless satchel to liberate his friend and comrade from the clutches of the mad god Bacchus! Collecting A&A: THE ADVENTURES OF ARCHER & ARMSTRONG #1-12, IMMORTAL BROTHERS: TALE OF THE GREEN KNIGHT #1, and ARMSTRONG AND THE VAULT OF SPIRITS #1 along with more than 20 pages of rarely seen art and extras!

This digital comic is available in english version. The following reading modes are available with the izneo reader:
A&A: The Adventures of Archer & Armstrong- Volume 1 - A&A: The Adventures of Archer & Armstrong Deluxe Edition HC - David Lafuente - to read online on izneo or download on your iOS and Android tablet or smartphone.

Read the album
Add to cart
Added to your cart
V.3 - A&A: The Adventures of Archer & Armstrong
(0)
$14.99
Beatdown in the bayou! At long last, Valiant’s gallant adventurers have finally located Armstrong’s long-missing wife…in that dreaded land that dare not speak its name: Florida! But after centuries of thinking that his near-immortal bride, Andromeda, was just a booze- induced hallucination, how will Armstrong make up for years of lies, losses, and infidelities? And, as if that wasn’t enough, a nefarious new force is about to release an army of bathsalt-using “Florida Men” to finish off Archer & Armstrong once and for all! It’s a true story (not really) ripped from today’s headlines (pretty much)! Pack your Crocs and don’t skimp on the lotion because the Sunshine State is about to hit Archer & Armstrong like a bad seafood buffet…and we only have Harvey Award-nominated writer Rafer Roberts (Harbinger Renegade) and acclaimed artist Mike Norton (Revival) to blame! Collecting A&A: THE ADVENTURES OF ARCHER & ARMSTRONG #9-12.

Read the album
Add to cart
Added to your cart
V.1 - A&A: The Adventures of Archer & Armstrong
(0)
$9.99
Become a super reader
Write reviews and get comics for free!

Read the album
Pre-order
Added to your cart
V.2 - Space Bastards
(0)
$14.99
In the future, unemployment and job dissatisfaction are sky-high. When you've got nothing left to lose, you join the Intergalactic Postal Service (IPS). Its postal fees are steep—and they go only to whomever ultimately fulfills the delivery, making every run a comically violent free-for-all between the most ruthless mercenaries in the cosmos! The interplanetary ensemble cast of Space Bastards, under the volatile leadership of Postmaster General Roy Sharpton, are constantly at each other’s throats trying to settle scores and earn big money. But when a rival corporation's teleportation technology threatens to make their role in the galaxy obsolete, the Bastards must work together to preserve a job they've come to love.