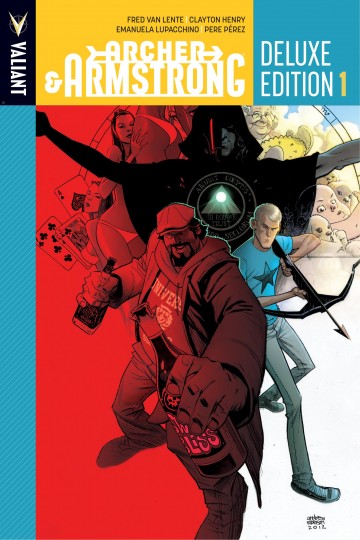 At last – an oversized deluxe hardcover collecting the complete first year of Archer & Armstrong by New York Times best-selling writer Fred Van Lente (Amazing Spider-Man, Marvel Zombies)! Join one of the most acclaimed adventures in comics as naive teenage assassin Obadiah Archer and the fun-loving, hard-drinking immortal called Armstrong unite to stop a plot ten thousand years in the making! From the lost temples of ancient Sumeria to modern day Wall Street, Area 51, and beyond, Valiant’s conspiracy-smashing adventurers are going on a globe-trotting quest to bring the down the unholy coalition of cultists known as the Sect – and stop each of history’s most notorious conspiracies from remaking the world in their own insane image. Collecting ARCHER & ARMSTRONG #0-13, the Archer & Amstrong Deluxe Editon oversized hardcover also comes jam-packed with more than 20+ pages of bonus features, including covers, character designs, and process art by Neal Adams, David Aja, Juan Doe, Tom Fowler, Clayton Henry, Emanuela Lupacchino and many more!

This digital comic is available in english version. The following reading modes are available with the izneo reader:
Archer & Armstrong- Volume 1 - Archer & Armstrong Deluxe Edition Book 1 HC - Clayton Henry - to read online on izneo or download on your iOS and Android tablet or smartphone.

Read the album
Add to cart
Added to your cart
V.7 - Archer & Armstrong
(0)
$14.99
Secrets! Shenanigans! A spectacular for the ages! Someone call the fire marshal because Valiant’s all-star celebration for Archer & Armstrong is about to get out of control! Red-hot creators Fred Van Lente (IVAR, TIMEWALKER), Ray Fawkes (Batman: Eternal), John Layman (Chew), Karl Bollers (Watson and Holmes), Clayton Henry (HARBINGER), Joe Eisma (Morning Glories) and a jam-packed roster of special guests are throwing a gigantic finale for Valiant’s conspiracy-busting, history-smashing swashbucklers – and they’ve brought along a heap of all-new tales to kick this hullabaloo into high gear! Featuring the true story of Armstrong’s first drink, the secret origin of Mary- Maria, the debut of a brand new breed of villain for the Valiant Universe, and much more, this very special volume collects ARCHER & ARMSTRONG #24, ARCHER & ARMSTRONG: THE ONE PERCENT #1, and stories from the oversized ARCHER & ARMSTRONG #25 anniversary spectacular, alongside the never-before-seen ARCHER & ARMSTRONG #0: DIRECTOR’S CUT! Don’t miss this one-of-a-kind look inside the script, art, and character designs of Archer & Armstrong’s acclaimed origin issue!

Read the album
Add to cart
Added to your cart
C.21 - Archer & Armstrong
(0)
$3.99
Living it up at the Hotel California! Dead celebrities, an extra- dimensional hotel, the truth about The Doors…and that was all in our first issue! Fred Van Lente’s ground-breaking run continues as Archer & Armstrong face off against their greatest foe, The Lizard King, as the fate of reality itself hangs in the balance!

Read the album
Add to cart
Added to your cart
Archer & Armstrong (2012) #0
(0)
$3.99
The true story of the Epic (Fail) of Giglamesh! Original series artist and Harbinger Wars superstar Clayton Henry returns to tell a tale of the early days of the man known as Armstrong! How early? How’s ancient Ur sound? For the first time, the 100 percent true story behind the Epic of Gilgamesh can be told… A tale of three warrior brothers, the Anni-Padda – or as you may know them, ARMSTRONG, the ETERNAL WARRIOR and TIMEWALKER – on a quest to the mysterious Faraway to bring back its immortal Boon. What they find is a lost land full of danger, excitement – and the greatest secret of the Valiant Universe! Plus: this issue tees up the next arc of A&A, beginning this June in issue #10!

Read the album
Add to cart
Added to your cart
Archer & Armstrong Deluxe Edition Book 2 HC
(0)
$49.99
Want them to read?
Give them comics!

Read the album
Add to cart
Added to your cart
V.2 - C.1 - Jennifer Blood
(0)
$3.99
So…once upon a time, a suburban housewife spent her nights as a mobster-murdering assassin, named JENNIFER BLOOD. Then she died…or did she? Because in the cozy cul-de-sacs of Bountiful, Utah, a noticeable number of normal people have gone missing. And by “normal,” I mean “mobsters under witness protection.” And by “missing,” I mean killed by someone that looks, sounds, and murders a lot like JENNIFER BLOOD… By FRED VAN LENTE (Wolverine) and VINCENZO FEDERICI (Red Sonja)!

Read the album
Add to cart
Added to your cart
DIE!namite: Our Bloody Valentine One-Shot
(0)
$3.99

Read the album
Add to cart
Added to your cart
Comic Book History of Comics: Comics For All
(0)
$6.99