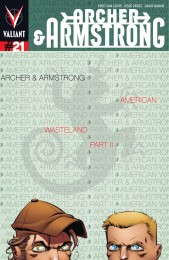 Living it up at the Hotel California! Dead celebrities, an extra- dimensional hotel, the truth about The Doors…and that was all in our first issue! Fred Van Lente’s ground-breaking run continues as Archer & Armstrong face off against their greatest foe, The Lizard King, as the fate of reality itself hangs in the balance! 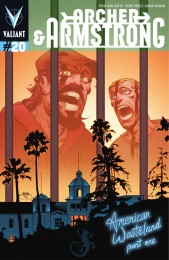 ALL-NEW ARC! START READING HERE! “AMERICAN WASTELAND” begins here! His whole life, Obadiah Archer has been lied to about his true heritage – but when he and his pal Armstrong arrive in L.A. to meet his real parents, they find them in the clutches of the CHURCH OF RETROLOGY! What insidious plans does THE LIZARD KING, the head of the favored religion of the Left Coast’s rich and famous, have for the Valiant Universe’s premier conspiracy busters? And what lurks in the Hollywood Hotel? (Hint: You can check in anytime you like, but you can never leave!) 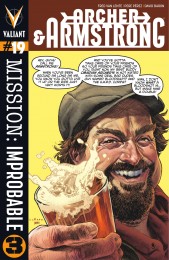 MISSION IMPROBABLE – PART 3 (of 4)! Archer & Armstrong elbow in on Bloodshot’s home turf! Bloodshot and H.A.R.D. Corps have captured Obadiah Archer and jailed him within their secret compound – but have they trapped Archer or has Archer trapped them? Attacked from within, and with a fighting-mad Armstrong ready to break down the doors, Project Rising Spirit is learning the hard way that breaking up Valiant’s premier team of conspiracy busters is tough to do! 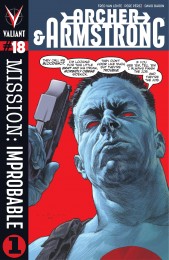 MISSION: IMPROBABLE – PART ONE! Archer & Armstrong at war with Bloodshot and H.A.R.D Corps! (GULP.) That’s right, Valiant’s swashbuckling adventure duo have been targeted for elimination by Project Rising Spirit’s most elite kill crew. Their mission? Elimainte Obadiah Archer – or die trying. Hot off the secret revelations of Archer #0, the fight of the year begins right here in the landmark first issue of this special four-part crossover event! 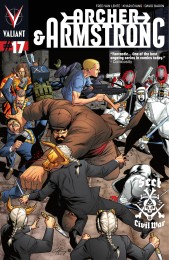 The SECT CIVIL WAR reaches its earth-shattering climax! (…and for once we mean that literally)! ARCHER versus ARMSTRONG! An incredible second identity for MARY-MARIA! Obadiah Archer gets a bold new role – and mission! The secret of the MASTER BUILDERS revealed! We were kidding, before but now we’re serious: This one changes EVERYTHING, and the Valiant Universe will never be the same again! 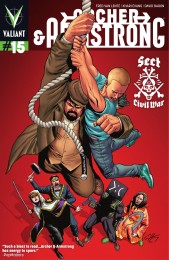 Showdown on the lowdown! The secret factions of Sect Civil War steamroll into their biggest battle yet! The multiple Sects that secretly govern our world have stepped out of the shadows and right into each others’ faces! Now the newly reunited Archer and Armstrong (for now) must stand tall in this conspiracy free-for-all and find a way to not only survive, but save the world in the process (again)! 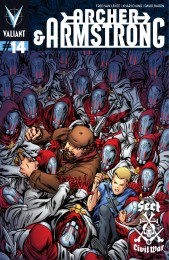 All-new arc, all-new jumping-on point! SECT CIVIL WAR starts here! Every enemy. Against each other. For centuries, the cloak-and-dagger coalition of conspiracies collectively known as The Sect has worked together to bring silent oppression and undercover tyranny to a world that thought it was free. But, now after centuries of profit sharing and uneasy alliances, the factions of The Sect are about to erupt into open conflict…and the only men that can end the insanity are Archer & Armstrong! Too bad they’re fighting for different sides! Why? How? And will either survive? The knockdown, drag-out A&A event of the year starts now – and no conspirator is safe! 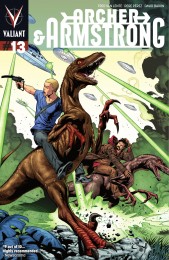 …and then things got really out of hand! When the war for the Faraway descends into all-out chaos, can the combined forces of Archer, Armstrong, Mary Maria and a whole mess of dinosaurs be enough to defeat General Redacted and his 500 Shades of Greys? Also: a horrible revelation is about tear apart the friendship between Valiant’s conspiracy-busting adventurers! Learn why we may have to re-title this book Archer VERSUS Armstrong right here in the epoch- spanning conclusion of “Far Faraway”! 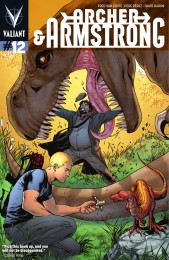 Caught in the jaws of the Faraway! General Redacted has laid claim to the greatest secret in a time-lost dimension that’s practically built on ‘em. Must be a doozy, huh? Well, it’s big enough that Redacted and his army of alien greys are laying waste to anyone and anything that approaches their occupied lands of the Faraway. Now, it’s down to Archer & Armstrong to run the greatest infiltration/liberation/inebriation mission history has ever known, which would be a cakewalk if its wasn’t for all the UFOs, hostile natives and, of course, the dinosaurs. Yup, could definitely do without those dinosaurs.

Dinosaurs! Flight 19! The lost colony of Roanoke! Alien Greys! Ambrose Bierce?! The mysterious disappearances of history have all wound up in the hollow world called The Faraway – and now so have Archer & Armstrong and their arch-nemesis! Can the Valiant Universe’s greatest conspiracy-busters find their way out before they’re trapped forever? And we warn you to have your insurance premiums paid up before reading the last page revelation of the origin of The Boon – because your jaw will drop! (And probably need to be reattached surgically.) 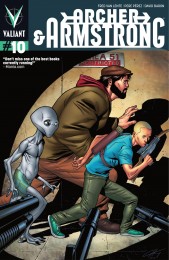 ALL-NEW ARC! Archer and Armstrong and Aliens. Oh my! Mary-Maria, Archer’s arch-nemesis/love interest/adopted sister is back, ready to take over The Sect – by any means necessary. And what better way to seize control of the secret society of secret societies than by unlocking their most secretive of secrets on the secretest place on Earth? And who but the Valiant Universe’s premiere team of conspiracy-busters can possibly stop her? Just when you thought this book couldn’t get any weirder, Archer & Armstrong storm Area 51…and things get weirder still! 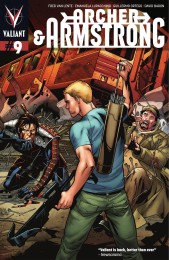 It’s all over for the Eternal Warrior! Gilad and Armstrong must set aside their sibling rivalry long enough to defeat the deadly new champion of The Null... ARCHER! It's win or go home (i.e. ""die"") as ""Wrath of the Eternal Warrior"" reaches its bone-crushing conclusion! 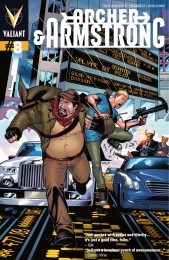 Nothing is forever. So say the Null. “The Wrath of the Eternal Warrior” gears up for its universe-shattering penultimate issue! “Nothing is Forever.” That is the motto of the Null, the enemies of the Geomancers for centuries. Now, at last, the Null have found the key to the utter destruction of all that is – and his name is Obadiah Archer! Can Aram and Gilad set aside their differences long enough to team up against Armstrong’s best friend – and will any of them survive the final battle? 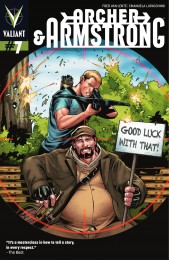 Who shoots The Shootist?! What would an Eternal Warrior be without an immortal enemy? For centuries, The Shootist – the Sect’s most feared assassin – has been a pivotal player in world events. Now he has Archer & Armstrong in his sights! With Gilad and the new Geomancer’s help, can they stop the man who only fires shots heard ’round the world? 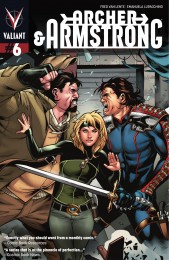 The all-new Geomancer must battle the “Wrath of the Eternal Warrior.” Throughout all of human history, the sacred lineage of the Geomancers has protected Earth from all who would seek to do it harm. But, now, a new Geomancer has been chosen – and she’s stuck keeping Archer & Armstrong out of harm’s way! But why has Kay McHenry been selected to wield this exceptional power? And just what is her connection to the Eternal Warrior’s blood vendetta? Only Gilad knows for sure…but he won’t be answering until he’s left Archer & Armstrong bloodied, broken and brutalized by his own fist and steel. Plus: more of the Eternal Warrior’s exploits throughout history revealed! 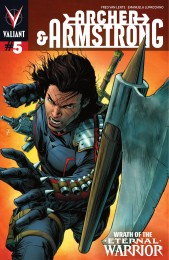 ALL-NEW ARC! Not even time itself can escape the Eternal Warrior! No one in the Valiant Universe is more dangerous or more experienced in the art of war than the undying Eternal Warrior. After thousands of years on the battlefield, he’s a master of strategy and weaponry, an unrelenting force of nature capable of dismantling entire armies with little effort and less conscience. His brother Armstrong, on the other hand, likes to read poetry and drink beer. But now — after years apart — the Eternal Warrior has a new mission: destroy young Obadiah Archer, Armstrong’s best-est new buddy and teammate in the war against The Sect. 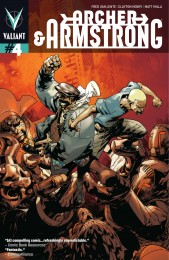 Archer & Armstrong make their last stand against The Sect high in the Himalayas! Every clan of The Sect has gathered together for the first time in millennia to harness the unthinkable, sanity-shattering destruction of the mythical Book. But one piece is still missing – and Obadiah Archer has it! If he turns it over, The Sect will give him back his family. If he refuses, the man called Armstrong dies! 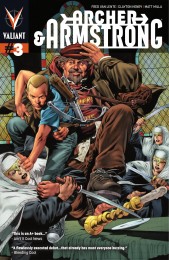 Those email forwards Grandma sends you? Every lurid cover of every supermarket tabloid? That website rambling on about truthers, birthers and black ops alien greys working for the U.N.? ALL TRUE. The Sect has dragged a curtain of confusion across the inner workings of the world, but fear not, the conspiracy-busters Archer & Armstrong are here to deliver Truth in the form of ass-kicking! But our heroes’ newfound friendship will face its greatest test as they battle The Sisters of Perpetual Darkness. Obadiah Archer thought he had been betrayed by his family before, but nothing can prepare him for this! 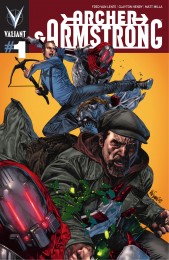 After years of training, Obadiah Archer has been dispatched to New York City to root out and kill the infamous Great Satan of his parents' sect. Unfortunately, dying has never been easy for Archer’s target – the hard-drinking year-old immortal known as Armstrong. Together, this unlikely pair of heroes is about to stumble headfirst into a centuries-old conspiracy that will bring the whole of ancient history crashing down on the modern day Valiant Universe. And that’s going to mean one Hell of a hangover 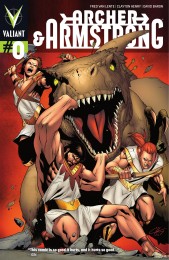