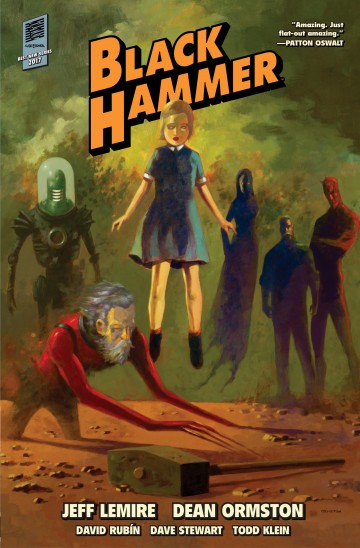 Jeff Lemire’s script for Black Hammer follows an increasingly familiar trope, taking characters based in comic book history and applying a subtle naturalism. Unlike Alan Moore and Dave Gibbon’s Watchmen which is an early example of the fashion, Lemire and artist Dean Ormston avoid exaggerated violence and melodrama for an offbeat, and downbeat, story of what happens to superheroes after their greatest battle and enforced retirement. The energy of the narrative comes from the interaction of the various archetypes. Marooned in a bubble reality, and missing their most powerful comrade who died attempting to escape the reality, the heroes find themselves in an idealised small-town that is, mostly, a celebration of old fashioned values. When moments of violence do intrude, often in flashback but twice towards the end of this volume to forward the gentle plot, they retain a level of shock and horror that is often lost in more vigorous superhero tales: Lemire is more concerned with characterisation than action, and the action becomes the product of character. The use of familiar superheroes – there is a ‘flying brick’, Superman style, a riff on Captain Marvel’s transition from child to man via a magic word, a witch who clearly evolved from EC’s horror comics – is given a gentle twist as Lemire shows them dealing with daily life, complex relationships and a vague sense of alienation. Rather than examine their public personae – only in the flashbacks do they really get to show off their abilities – the plot imagines their private lives. Superpowers are less a liberation than a curse for these heroes, and the constraints of a small-town determine their adventure. Even when one local police-man threatens to become a corrupt villain, he is swiftly dispatched. The superhero genre is transformed into a domestic drama, charming but with a fascinating mystery that slowly unfolds in elegant detail.

The first chapter of the highly acclaimed, Eisner Award-winning superhero saga in deluxe, oversized hardcover format. Collects the first and second volumes of Black Hammer, and Black Hammer: Giant Sized Annual in a deluxe, hardcover, and oversized format with a new cover, sketchbook extras, and more! Mysteriously banished from existence by a multiversal event, the old superheroes of Spiral City now lead simple lives on a bizarre farm from which there is no escape! But as they employ all of their super abilities to free themselves from this strange purgatory, a mysterious stranger works to bring them back into action for one last adventure! "I don't read many comics these days, and I can't remember the last time I read a superhero comic, but I'm loving Black Hammer." - Mike Mignola "Black Hammer is easily one of Lemire's best creations." - Scott Snyder "Amazing. Just flat-out amazing." - Patton Oswalt

Read the album
Add to cart
Added to your cart
V.4 - Black Hammer
(0)
$10.99 $5.99
The Eisner Award-winning superhero saga continues with this two-part mystery that will change the world forever! After learning how they got trapped on the farmworld, our heroes find themselves with everything they thought they wanted. Yet not everything is right just yet and it takes the strong resolve of the new Black Hammer to get the team back together, as shocking revelations change their world at every turn! Collects Black Hammer: Age of Doom #6-12 from the Eisner Award winning team of Jeff Lemire and Dean Ormston, with a special guest artist appearance from superstar creator Rich Tommaso!

Read the album
Add to cart
Added to your cart
Black Hammer: Streets of Spiral
(0)
$10.99 $5.99
From the Eisner-award winning Black Hammer superhero fantasy comes this collection of three stories and a universe guide tied to the world of Jeff Lemire and Dean Ormston's hit comic book series. A Lovecraftian teen decides she will do anything to make herself ''normal'', a bizarre witch guides her guests through her house of horrors, and an all-star slate of guest artists illustrate a bizarre adventure with Colonial Weird on the farm. Also featuring a complete world guide to the Black Hammer universe and its characters. Collects: Black Hammer: Giant Sized Annual, Black Hammer: Cthu- Louise, World of Black Hammer, and material from Free Comic Book Day 2019.
eazyComics

Read the album
Add to cart
Added to your cart
Black Hammer/Justice League: Hammer of Justice!
(0)
$14.99 $7.99
Want them to read?
Give them comics!

Read the album
Add to cart
Added to your cart
V.3 - The World of Black Hammer
(0)
$29.99 $14.99
The Eisner Award-winning Black Hammer universe is given a closer look, with two complete series drawn by Tyler Crook and Gabriel Hernández Walta! In Colonel Weird: Cosmagog, sanity-challenged space adventurer Colonel Weird embarks on a strange journey through space and time for something that he's long forgotten with his sanity and life at stake! In Barbalien: Red Planet, the shape-shifting superhero Barbalien struggles to find his place in the world during the AIDS crisis--something made all the more difficult when a Martian enemy from the past follows him to earth to take him back, dead or alive. Collects Colonel Weird: Cosmagog and Barbalien: Red Planet in a digital format with a new cover, sketchbook extras, and more!

Read the album
Add to cart
Added to your cart
Skulldigger and Skeleton Boy: From the World of Black Hammer Volume 1
(1)
$11.99

Read the album
Add to cart
Added to your cart
Barbalien: Red Planet--From the World of Black Hammer
(0)
$11.99

Read the album
Add to cart
Added to your cart
Doctor Andromeda and the Kingdom of Lost Tomorrows: From the World of Black Hammer
(0)
$11.99

Read the album
Add to cart
Added to your cart
Colonel Weird: Cosmagog
(0)
$11.99