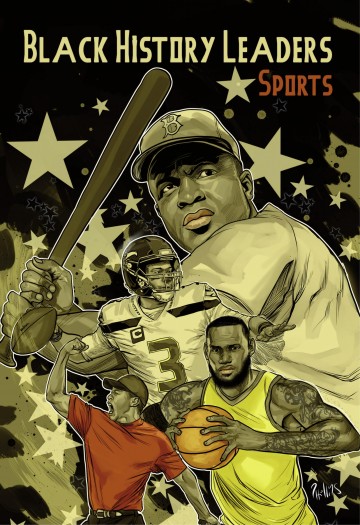 Jackie Robinson, Lebron James, Tiger Woods, Russell Wilson have all held the title of "greatest player of all-time" in their respective sports. How did they get there? And what influence have they had on our culture? The first African-American to play major league baseball, Jackie Robinson broke baseball's color line and played a role in the Civil Rights Movement. Now the holder of three NBA championships, four MVP awards, two Olympic gold medals, and much more, LeBron James' fame has afforded him the ability to use his numerous endorsements to start companies, participate in social activism, and donate to worthwhile causes. By far, Tiger Woods is the most famous golfer of all time who's TGR Foundation delivers unique and empowering educational opportunities that lead to personal and professional excellence. Expectations and the pressure following them could break lesser men. Fortunately for Seattle Seahawks fans, Russell Wilson manages to withstand success and defeat with grace and aplomb. Read their exciting stories in a new media the graphic novel.

Read the album
Add to cart
Added to your cart
Black History Leaders: Volume 2: Nelson Mandela, Michelle Obama, Kamala Harris and Tyler Perry
(0)
$11.99
The impact of the leadership demonstrated by Kamala Harris, Tyler Perry, Nelson Mandela, and Michelle Obama cannot be overstated. As the first woman to hold the office of Vice President of the United States, Kamala Devi Harris, lawyer, prosecutor, and former attorney general, has devoted herself to bettering her constituents' lives while focusing on social issues that help minorities women. Tyler Perry is known for wearing many different hats and wigs, such as actor, director, screenwriter, playwright, producer, author, and now comic book character. His inspiring life story has had dramatic highs and lows that have launched him to superstardom. Nelson Mandela of South Africa is one of the most important figures of the last century. He symbolizes the struggle against racial and political oppression and serves as a model for sustaining that struggle with grace and decency. From humble beginnings in Chicago, Michelle Obama rose to become an outspoken advocate, trailblazing First Lady, and international style icon. Their stories inspire generations and shape our culture. Read their exciting stories by exploring the lives of those who made history.

Read the album
Add to cart
Added to your cart
Black History Leaders: Music: Beyonce, Drake, Nikki Minaj and Prince
(0)
$11.99
A tribute to women in comics & manga!
Enjoy adventures from a female perspective!

Read the album
Pre-order
Added to your cart
Classic Hollywood Leading Men: John Wayne, Christopher Reeve, Bruce Lee and Vincent Price
(0)
$11.99
The actors profiled in this graphic novel share one thing in common: They’re unforgettable. Born Marion Mitchell Morrison, his distinct vocal cadence, intimidating physical presence, and signature look made him a box office draw for 30 years. Few actors achieve the level of fame afforded silver screen icon, John Wayne. What makes a man a true hero? Is it the role he plays or the life he leads? Explore the life of legendary actor and philanthropist Christopher Reeve in this tribute to the man behind Superman’s cape. The most influential martial artist of all time, Bruce Lee was an actor, teacher, and now, an icon. Follow Bruce’s life from child actor to his tragic death and posthumous superstardom. The name Vincent Price is synonymous with all things horror. Explore the life of an actor who transcended a genre and became the voice of the darker side of life. TidalWave’s popular TRIBUTE line tells the stories of famous people who left an indelible impression on our popular culture.
Coming soon