A serial killer known as Red Smile is slaughtering his way through California, taunting the police with his riddles. Brian Warner and his partner Marcus James Reed are the two cops trying to take Red Smile down. 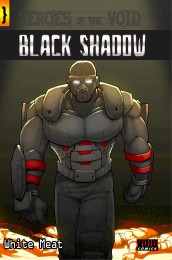 Brian Warner is an L.A.P.D. police detective, martial artist and the definition of no-nonsense cop. He is also a masked vigilante known as Black Shadow who hunts killers and does what the police can't: He works beyond the law to protect it. A gruesome murder has the police in shock: Eyes, fingertips, tongue and even the brain of the victim have been removed. A trail of blood leads to old Dunwich Institute for the criminally insane. Detective Marcus Reed, the only cop who knows Black Shadow's secret identity is none too happy when his 'secret informant' gets on the case, as the vigilante usually deploys very questionable methods. Still, Black Shadow might be the only one able to catch the killer before he murders his next victim. Prepare for a murder mystery wrapped in a superhero graphic novel. Collects Black Shadow: White Meat Issues 1-5