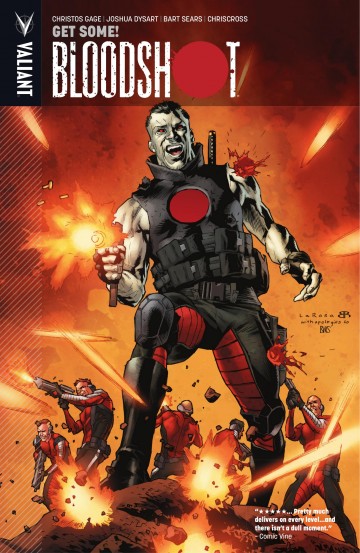 90s tech. Bad attitudes. No wiﬁ . It’s Valiant’s 21st-century shock troops – head-to-head against Project Rising Spirit’s ﬁrst wave of superhuman specialists! With a valuable oil pipeline in dire peril, Bloodshot and the expendable commandos of H.A.R.D. Corps are headed to Africa to bring down a network of terrorist saboteurs. But as Bloodshot digs into the multinational oil conglomerate he’s been brought in to protect, he’ll soon ﬁnd himself confronted by the complex truth behind the terror – and up close and personal with an older, scrappier, more grizzled generation of wet-wired soldier from the glory days of proxy wars and state-sponsored assassination. Collecting BLOODSHOT AND H.A.R.D. CORPS #18-19, BLOODSHOT AND H.A.R.D. CORPS: H.A.R.D. CORPS #0, and BLOODSHOT AND H.A.R.D. CORPS #22-23, don’t miss a single shot ﬁred as acclaimed creators Christos Gage (Superior Spider-Man), Joshua Dysart (Harbinger Wars) and Duffy Boudreau (BlackAcre) partner with an all-star cast of top talents – including Bart Sears (X-O Manowar), ChrisCross (Superman/Batman) and Al Barrionuevo (The Authority) – for a brutal, globe-spanning cavalcade of missions from the classiﬁed archives of Project Rising Sprit and beyond. “You want a team book with exciting action, good writing and fun powers? Look no further than Bloodshot.” – Comic Vine

This digital comic is available in english version. The following reading modes are available with the izneo reader:
Bloodshot- Volume 5 - Bloodshot Vol. 5: Get Some! TPB - Alejandro Barrionuevo - to read online on izneo or download on your iOS and Android tablet or smartphone.

Read the album
Add to cart
Added to your cart
V.6 - Bloodshot
(0)
$14.99
A murderer’s row of comic talents – Peter Milligan (Hellblazer), Duane Swierczynski (Birds of Prey), B. Clay Moore (JSA: The Liberty Files), Howard Chaykin (American Flagg), Lewis LaRosa (Punisher MAX), Manuel Garcia (Black Widow), and many more – come together for a collection of stories from throughout the bullet-riddled history of Valiant’s most brutal and relentless hero! Meet the man behind Bloodshot – or is he? – when one soldier’s untapped killer instinct takes over in “The Glitch”! Then, Russian superpies don’t die easy as “Sleepers” takes Bloodshot deep into the biting cold of a former Soviet state and face to face with an enemy eerily similar to himself. Plus: the origin of Bloodshot retold, Howard Chaykin’s “Protocol”, and much more! Collecting BLOODSHOT #24, the oversized BLOODSHOT #25 anniversary extravaganza, and an exclusive Director’s Cut of BLOODSHOT #1 – featuring a never-before-seen, behind-the- scenes look inside the script, art, and character designs of the blockbuster first issue that set Bloodshot in motion!

Read the album
Add to cart
Added to your cart
V.1 - Bloodshot
(1)
$14.99
Bloodshot- Volume 5 - Bloodshot Vol. 5: Get Some! TPB - Alejandro Barrionuevo - to read online on izneo or download on your iOS and Android tablet or smartphone.

Read the album
Add to cart
Added to your cart
C.13 - Bloodshot
(0)
$3.99
Harbinger Wars is going out with a bang! A battle for the lives of Project Rising Spirit’s escaped psiot children is being waged between Toyo Harada, Peter Stancheck’s Renegades and the H.A.R.D. Corps – and Bloodshot stands in the center of it all. But even if Bloodshot manages to win the day, will the tortured, traumatized, and über- powerful kids he’s fought for choose to remain under the protection of the Harbinger hunter that once haunted their nightmares? Something’s in the air – and a new era is unfolding for the weapon – no, the soldier – no, the man known as Bloodshot.

Read the album
Add to cart
Added to your cart
C.1 - Bloodshot
(0)
$3.99
Bloodshot- Volume 5 - Bloodshot Vol. 5: Get Some! TPB - Alejandro Barrionuevo - to read online on izneo or download on your iOS and Android tablet or smartphone.

Read the album
Add to cart
Added to your cart
Bloodshot (2019) Book 1
(0)
$9.99
Become a super reader
Write reviews and get comics for free!

Bloodshot- Volume 5 - Bloodshot Vol. 5: Get Some! TPB - Alejandro Barrionuevo - to read online on izneo or download on your iOS and Android tablet or smartphone.
New

Read the album
Add to cart
Added to your cart
C.3 - Nyx
(0)
$3.99
Nyx once killed Vampirella. More recently, they were tenuous allies. When their paths cross again, will it be as friends, enemies, somewhere in between, or all the above? How does Vampirella fit into Nyx's quest to learn how to live among humanity without harming them, when it's something Vampirella herself has never quite mastered? It could all become moot when old-school Vampirella foes the Cult of Chaos return seeking vengeance, both on Vampi and the disloyal daughter of Chaos who has rejected their mad god. (That's Nyx, FYI.) One thing's for sure - fangs, fists, and flame will fly!