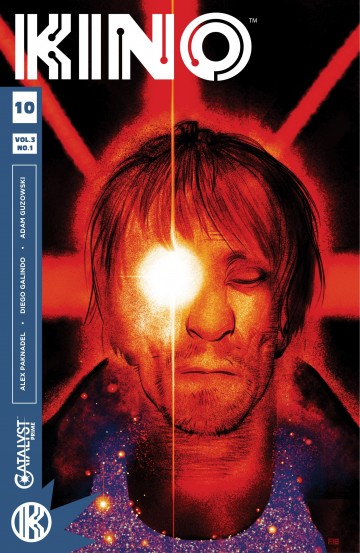 Alistair Meath has finally broken out of his virtual prison and has returned to the real world. Unfortunately, the reunion with his family has not yet happened. Meath finds himself homeless, badly scarred, and wandering the streets of London alone while his family continues to move on without him. Meanwhile, a new conservative public figure has risen to power and has begun spreading a new truth that The Event never happened, causing trouble for Gilmour, who only just survived his previous encounter with KINO last season. Meath, though without a home, still longs for one and has decided on a new mission. To get his life back.

Read the album
Add to cart
Added to your cart
V.9 - Catalyst Prime: KINO
(0)
$3.79
The final showdown is here! Everything comes to a head in the final issue of season two of KINO. Agent Gilmour has infiltrated Aturo's base and confronted the devious scientist. While Coal has located the missing Alister Meath, he's not prepared for a rampaging KINO in all his powerful glory. With Alistair finally free, no one is truly safe from his seemingly unstoppable wrath.

Read the album
Add to cart
Added to your cart
Incursion TPB
(0)
$14.99
The debut of Valiant’s biggest villain: the alien conqueror Imperatrix Virago! The only thing standing in her way is the Eternal Warrior and Geomancer. Can the duo of heroes protect the planet from a seemingly unstoppable extraterrestrial foe and her army of the undead? Collecting the complete limited series, INCURSION #1-4.