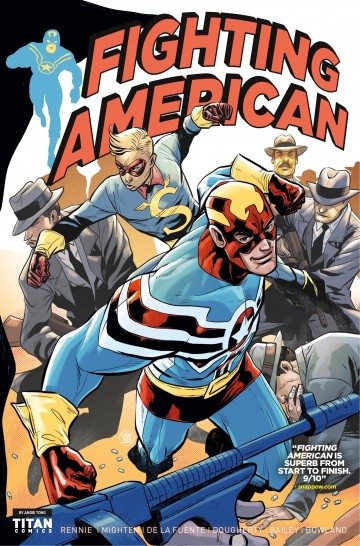 Fighting American has now been released into the custody of FBI Special Agent Lydia Rutherford for debriefing. While on the way to the juvenile detention center to collect Speedboy, Fighting American explained his origin story to an incredulous Rutherford. Meanwhile, Chaos Lad and Madam Chaos revealed their shared secret and plotted the next stage of their revenge plan.

This digital comic is available in english version. The following reading modes are available with the izneo reader:
Fighting American- Volume 1 - Fighting American - Volume 1 - Brave New World - Chapter 3 - Gordon Rennie - to read online on izneo or download on your iOS and Android tablet or smartphone.

Read the album
Add to cart
Added to your cart
V.2 - Fighting American
(0)
$12.99
The fantastic return of Joe Simon and Jack Kirby’s legendary two- fisted super-hero, originally created back in 1954. Fighting American and Speedboy are struggling to fit into the strange new world of the 21st Century, unaware that one of their old enemies, the notorious Doubleheader, is now the secret head of the FBI and is plotting to destroy them once and for all. Then there’s the news of a long lost Grandson and Great Grandson (or should that be Nephew and Great Nephew?), a bust-up between Fighting American and Speedboy, and a ruthless TV news anchor determined to shatter FA’s all-American hero image on live TV. It’s clear to see that life’s never easy when you’re America’s only superhero! This all-new adventure, written by Gordon Rennie (Judge Dredd, Rogue Trooper, and Missionary Man) and drawn by Andie Tong (Spectacular Spider-Man, The Batman Strikes, and Tekken), sees the ultimate icon of truth, justice and the American Way bringing some much-needed two-fisted justice to a jaded cynical world of multimedia, fake news and global terrorism. Collects Fighting American #2.1-4. “A top of the pile book, better than many of the DC and Marvels out there right now.” – Nerdly “Fighting American has the whiz of classic comics with a twist you won’t want to miss.” – Adventures In Poor Taste
Fighting American- Volume 1 - Fighting American - Volume 1 - Brave New World - Chapter 3 - Gordon Rennie - to read online on izneo or download on your iOS and Android tablet or smartphone.

Read the album
Add to cart
Added to your cart
V.2 - C.1 - Doctor Who: The Lost Dimension
(0)
$4.99
The Lost Dimension Part 5 An unknown force is striking from the depths of space, emerging as impossibly-large white holes over civilized planets, absorbing or annihilating everything that lives. This force has spread throughout all of time, challenging the Doctor in all of his incarnations. But not all of them were at the point of impact – many of the Doctor’s previous selves, along with good friends and companions, are scattered throughout history on journeys of their own. We turn our attention first to the archaeologist of the impossible… River Song! Continues in Doctor Who: The Twelfth Doctor #3.8 – The Lost Dimension Part 6