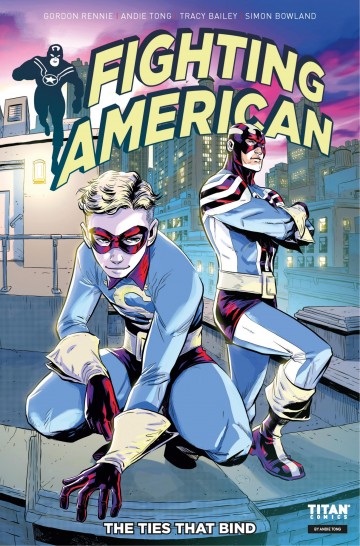 After successfully apprehending the wannabe super-villain Captain Zombie Master, Speedboy stormed off in disgust when he discovered that his guardian, Fighting American, didn’t actually know his real name, leaving Fighting American alone for the first time in a strange land and a strange time. Meanwhile, one of Fighting American’s old enemies, Double Header, has risen to become the head of both the FBI and a vast criminal empire. Using his position, he replaced Special Agent Poppy Rutherford with a pair of corrupt and murderous Agents called Carver and Cruikshank with the intention of killing Fighting American, and banished Rutherford back to the basement. At the same time, news of Fighting American’s re-appearance has spread and reached the ears of his only two remaining relatives, grandson and great grandson Chester and Chad Krunkle.

This digital comic is available in english version. The following reading modes are available with the izneo reader:
Fighting American- Volume 1 - Fighting American - Volume 2 - The Ties That Bind - Chapter 2 - Gordon Rennie - to read online on izneo or download on your iOS and Android tablet or smartphone.

Read the album
Add to cart
Added to your cart
V.2 - Fighting American
(0)
$12.99
The fantastic return of Joe Simon and Jack Kirby’s legendary two- fisted super-hero, originally created back in 1954. Fighting American and Speedboy are struggling to fit into the strange new world of the 21st Century, unaware that one of their old enemies, the notorious Doubleheader, is now the secret head of the FBI and is plotting to destroy them once and for all. Then there’s the news of a long lost Grandson and Great Grandson (or should that be Nephew and Great Nephew?), a bust-up between Fighting American and Speedboy, and a ruthless TV news anchor determined to shatter FA’s all-American hero image on live TV. It’s clear to see that life’s never easy when you’re America’s only superhero! This all-new adventure, written by Gordon Rennie (Judge Dredd, Rogue Trooper, and Missionary Man) and drawn by Andie Tong (Spectacular Spider-Man, The Batman Strikes, and Tekken), sees the ultimate icon of truth, justice and the American Way bringing some much-needed two-fisted justice to a jaded cynical world of multimedia, fake news and global terrorism. Collects Fighting American #2.1-4. “A top of the pile book, better than many of the DC and Marvels out there right now.” – Nerdly “Fighting American has the whiz of classic comics with a twist you won’t want to miss.” – Adventures In Poor Taste
Fighting American- Volume 1 - Fighting American - Volume 2 - The Ties That Bind - Chapter 2 - Gordon Rennie - to read online on izneo or download on your iOS and Android tablet or smartphone.

Read the album
Add to cart
Added to your cart
C.1 - Fighting American
(0)
$3.99
A tribute to women in comics & manga!
Enjoy adventures from a female perspective!

Fighting American- Volume 1 - Fighting American - Volume 2 - The Ties That Bind - Chapter 2 - Gordon Rennie - to read online on izneo or download on your iOS and Android tablet or smartphone.

Read the album
Add to cart
Added to your cart
V.1 - Tank Girl
(2)
$13.99
By a feat of sheer stubbornness, Hewlett & Martin’s Tank Girl has managed to survive for over three decades. As a celebration, we’ve given her a fresh lick of paint to cover up the rust, and raided the deepest reaches of her panty drawer for embarrassing photos, libellous documents, and discarded chocolate wrappers. This first book in the series covers the genesis and early years of Tank Girl, before everything went a bit weird.