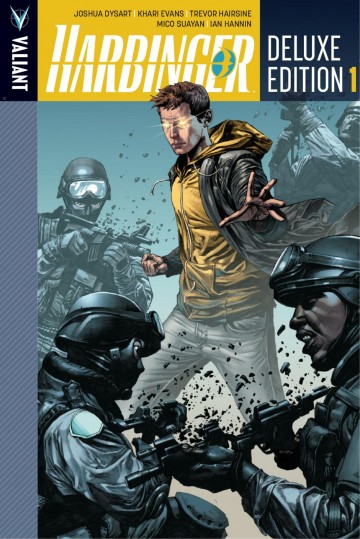 An oversized, deluxe hardcover collecting the landmark first year of Harbinger in the Valiant Universe! Outside the law. Inside your head. You’ve never met a team of super-powered teenagers quite like the Renegades. Skipping across the country in a desperate attempt to stay one step ahead of the authorities, psionically-powered teenager Peter Stanchek only has one option left – run. But he won’t have to go it alone. As the shadowy corporation known as the Harbinger Foundation draws close on all sides, Peter will have to find and recruit other unique individuals like himself… other troubled, immensely powerful youths with abilities beyond their control. Their mission? Bring the fight back to the Harbinger Foundation’s founder Toyo Harada – and dismantle his global empire brick by brick… Collecting the sold-out HARBINGER #0-14, the Harbinger Deluxe Edition Vol. 1 HC also comes jam-packed with more than 20 pages of never- before-seen art and extras, direct from the Valiant vaults.

This digital comic is available in english version. The following reading modes are available with the izneo reader:
Harbinger- Volume 1 - Harbinger Deluxe Edition Vol. 1 HC - Philippe Briones - to read online on izneo or download on your iOS and Android tablet or smartphone.

Read the album
Add to cart
Added to your cart
V.6 - Harbinger
(0)
$14.99
Cold war no more! Peter Stanchek. Toyo Harada. The two most destructive superpowers in the world — literally — have come to a reckoning of will, and in the fallout of their cataclysmic conﬂict, each will come to grips with a world in which the other is free…and unchecked. Their former families, the Harbinger Foundation and the Renegades, lie in shards around them. What will stop these men — either of them — from reducing the world to ashes? Jump on board the convention-defying series that the Onion/A.V. Club calls “the crown jewel of Valiant’s line-up” as New York Times best-selling writer Joshua Dysart and red-hot artists Rafa Sandoval, Khari Evans, Mico Suayan, and Stephen Segovia close the door on one generation of Harbinger Renegades…and prepare the foundation for another. Collecting HARBINGER: OMEGAS #1–3 and HARBINGER: BLEEDING MONK #0.

Read the album
Add to cart
Added to your cart
V.1 - Harbinger
(0)
$39.99
Harbinger- Volume 1 - Harbinger Deluxe Edition Vol. 1 HC - Philippe Briones - to read online on izneo or download on your iOS and Android tablet or smartphone.

Read the album
Add to cart
Added to your cart
Harbinger (2012) #0
(0)
$3.99
Rise to power! Toyo Harada, CEO of Harada Global Conglomerates and the most potent known psionic in the world, has a vision for the perfect future. A vision he will realize with or without the consent of the rest of humanity. In order to achieve it, he’s built a private army of super-powered hyper-telekinetics within the Harbinger Foundation. But who was Harada before he became the world’s most powerful man? And what are the origins of his vast ambitions? Don’t miss those answers and more in this special standalone issue that will define the future of the Valiant Universe.

Read the album
Add to cart
Added to your cart
V.1 - Sirens of the Norse Sea
(0)
$5.99
Vikings, the world's fiercest warriors and greatest sailors rule the land. But the sea has never been so easy to claim, for another creature dwells within it: the Siren. For generations, Viking clans have had to face Siren tribes: a constant battle between cunning and brute strength, and charm and sorcery, with the vast ocean in between. In each book in the series, their paths intersect, for better or for worse.