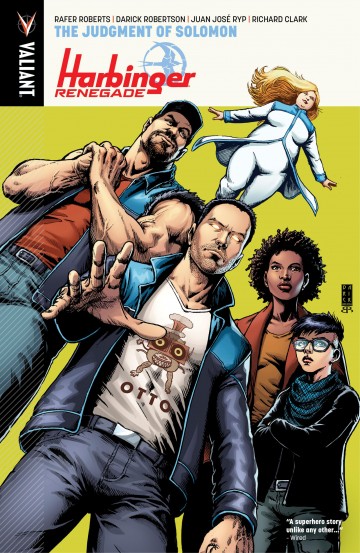 Anyone you know could become a psionically powered “harbinger.” Your neighbor. Your boss. Your best friend. Your kids. Six months ago, a secret team of renegade whistleblowers leaked the existence of these extraordinarily dangerous individuals to a stunned world. Today, all across the country, crude, DIY psiot activation attempts have left hundreds brain-damaged…or worse. The emergence of a new psiot in a community often leads to riots and mass violence. America is terrified of what could happen next. Now, Kris Hathaway, John “Torque” Torkelson, Faith “Zephyr” Herbert, and Peter Stanchek are about to discover their calling. Together, the HARBINGER RENEGADES are moving from town to town, building their ranks, and subverting authority one mind at a time…and setting out to prove once and for all that behind their power, there has always been a purpose. The most fearless superteam in comics is going underground for AN ALL-NEW ONGOING SERIES from rising star Rafer Roberts (Plastic Farm) and acclaimed artists Darick Robertson (Transmetropolitan, The Boys) and Juan José Ryp (Britannia)! Collecting HARBINGER RENEGADE #1-4.

This digital comic is available in english version. The following reading modes are available with the izneo reader:
Harbinger Renegade- Volume 1 - Harbinger Renegade Vol. 1: The Judgement of Solomon TPB - Raul Allen - to read online on izneo or download on your iOS and Android tablet or smartphone.

Read the album
Add to cart
Added to your cart
V.2 - Harbinger Renegade
(0)
$14.99
""MASSACRE"" brings death to a major Valiant hero! Toyo Harada’s former protege – Alexander Solomon, a “psiot” with the ability to predict and analyze potential futures – has been waiting for this moment. With the Harbinger Renegades – Peter Stanchek, Faith, Kris Hathaway, and Torque – now reunited as a result of his covert manipulations, his ultimate gambit can now begin. But he’s not the only one who has been watching. Major Charlie Palmer has just re assigned a new division of the militarized psiot hunters codenamed H.A.R.D. Corps to active duty… and they’re about to bring a torrent of blood and calamity roaring into the streets of a major American metropolis for an all-out firefight. Harvey Award-nominated writer Rafer Roberts (Plastic Farm) and superstar artist Darick Robertson (The Boys, Transmetropolitan) begin THE ROAD TO HARBINGER WARS 2 – right here with a bang that will reverberate throughout the entire Valiant Universe…and claim the life of a major hero! Collecting HARBINGER RENEGADE #5-8 and #0.

Read the album
Add to cart
Added to your cart
V.1 - Harbinger Renegade
(0)
$9.99
Want them to read?
Give them comics!