In the deserts outside Las Vegas, Bloodshot has banded together with Project Rising Spirit’s most dangerous escapees. But when the Harbinger Wars erupt all around them, can he shape these super- powered children into a force for good – or are they too far gone? He’ll have to find out the hard way as the opposing forces of PRS and the Harbinger Foundation descend on all sides, bringing about a crucible the likes of which the Valiant Universe has never seen… Collecting BLOODSHOT #10-13 by acclaimed writer Duane Swierczysnki (Birds of Prey) and legendary artist Barry Kitson (Amazing Spider- Man), jump headlong into the uncompromising action of Valiant’s first crossover event right here with an all-new standalone story arc that will redefine the weapon – no, the soldier – no, the hero known only as Bloodshot. “The best big action book on the shelves…” – Comic Book Resources “Month after month, Bloodshot continues to be the most brutal superhero book on the stands.” – IGN 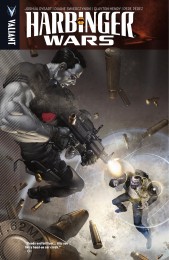 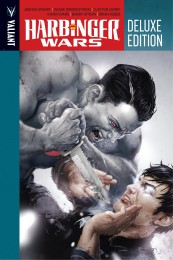 Re-presenting Valiant’s best-selling crossover event in complete chronological order, the acclaimed Harbinger Wars saga gets the deluxe oversized hardcover treatment – with more than 20+ pages of bonus content and rarely-seen special features! When an untrained and undisciplined team of super-powered test subjects escape from Project Rising Spirit and onto the Vegas Strip, Bloodshot and the Harbinger Renegades will find themselves locked in battle against a deadly succession of opponents – and each other. As the combined forces of the H.A.R.D. Corps, Generation Zero, and omega-level telekinetic Toyo Harada all descend on Las Vegas to vie for the control of Rising Spirit’s deadliest assets, the world is about to discover the shocking price of an all-out superhuman conflict…and no one will escape unscathed. Who will survive the Harbinger Wars? Collecting HARBINGER WARS #1-4, HARBINGER #11-14, BLOODSHOT #10-13 and material from the HARBINGER WARS SKETCHBOOK, the Harbinger Wars Deluxe Edition HC is the only place to find the complete story of the groundbreaking crossover that IGN calls “one hell of a ride.”