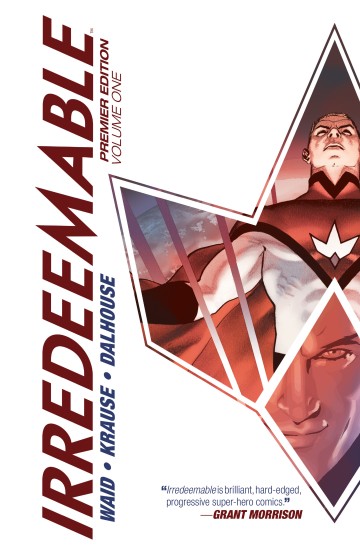 What's to Love: Mark Waid is not only our former editor-in-chief, but is also one of our favorite storytellers in comics, having amassed a long list of critically acclaimed hits in his 20-year career and writing such iconic characters as Superman, Captain America, Batman, The Flash, and Wonder Woman. Waid earned a legion of fans because his stories tended to ground seemingly infallible heroes, and in titles like DC's Kingdom Come, Gorilla Comics' Empire, and our own Irredeemable, he showed the other side of what it's like to wear the capes and tights. We are proud to present Waid's award-nominated Irredeemable in a new collection of oversized, deluxe hardcovers for existing and new fans to enjoy!What It Is: When the Plutonian, the world's greatest superhero, snaps and turns into the world's greatest villain, only his former teammates have a chance at stopping his rampage. But while on the run from the world's most powerful and angry being, will these former teammates discover his secrets in time? How did he come to this? What became of the hope and promise once inside him? What happens to the world when its savior betrays it? What makes a hero irredeemable? An apocalyptic superhero tale by the author of Empire and multiple Eisner Award winner Kingdom Come! Collects issues #1-8 of Irredeemable.

This digital comic is available in english version. The following reading modes are available with the izneo reader:
Irredeemable- Volume 1 - Irredeemable Premier Edition Vol. 1 - Mark Waid - to read online on izneo or download on your iOS and Android tablet or smartphone.

Read the album
Add to cart
Added to your cart
V.10 - Irredeemable
(0)
$9.49
THE FINAL VOLUME OF MARK WAID'S SUPERHERO MASTERPIECE! You've been with the Plutonian from his first moments of betrayal to the human race...now it's finally time to answer the question...can one be so evil, they become truly irredeemable? Or is there hope for Tony and humanity yet? An explosive conclusion to Mark Waid's Eisner-nominated epic!The Eisner Award nominated comic book industry event ends with the last exciting volume of the original ongoing superhero series from Mark Waid! IRREDEEMABLE dares to ask the question: what if the world's greatest hero decided to become the world's greatest villain? A "twilight of the superheros"-style story that examines super-villains from the writer of KINGDOM COME and SUPERMAN: BIRTHRIGHT.

Read the album
Add to cart
Added to your cart
V.1 - Irredeemable
(0)
$9.49
Irredeemable- Volume 1 - Irredeemable Premier Edition Vol. 1 - Mark Waid - to read online on izneo or download on your iOS and Android tablet or smartphone.

Read the album
Add to cart
Added to your cart
Irredeemable Premier Edition Vol. 1
(0)
$14.99
Want them to read?
Give them comics!

Irredeemable- Volume 1 - Irredeemable Premier Edition Vol. 1 - Mark Waid - to read online on izneo or download on your iOS and Android tablet or smartphone.

Read the album
Add to cart
Added to your cart
V.10 - Ignited
(0)
$3.99
It’s the first day back at Phoenix Academy High—but this year, there’s no back to school excitement in the air, as returning students and faculty are haunted by memories of last year's horrific attack. So many friends and colleagues were lost, and some of those who survived underwent changes—they IGNITED, gaining supernatural abilities they barely understand. Little do they know this is just the beginning…