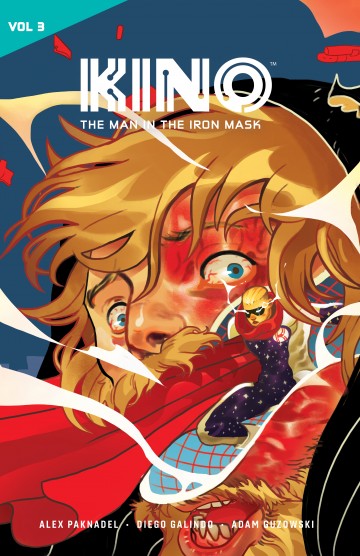 It has been three months since Alistair Meath woke to a world profoundly changed. Instead of exulting in the near-miss of the asteroid, Britain has turned in on itself, becoming unsettled, cruel, and paranoid, with news outlets claiming the asteroid itself never existed. No further KINO sightings have been reported, and against this darkening backdrop, Alistair Meath now finds himself sleeping rough on the pitiless streets of West London, profoundly traumatized by his experiences in space and then Assante's lab. He remembers the meteor, then rage and blood, then . . . nothing. But it seems that another man has taken on the role of Alistair Meath while he was away—a man who is physically identical to him.

Read the album
Add to cart
Added to your cart
V.14 - Kino
(0)
$3.99
As Myers's destructive rampage reaches its grisly crescendo, Meath finally comes to terms with who he is and what he has to do. Making his way to Piccadilly Circus past the police cordon, he comes face- to-face with the man whose mind he unwittingly destroyed when he transferred his trauma to him. The battle royale is on.

Read the album
Add to cart
Added to your cart
C.12 - Kino
(0)
$3.79
The nightmare continues for Meath as he helplessly surveils the imposter playing house with his own family. But there's hope when Patricia begins to uncover cracks in his surface. Meanwhile, Gilmour receives an unexpected visit from Coal, who shares his alarming findings on Assante's lab.

Read the album
Add to cart
Added to your cart
KINO No. 15
(0)
$3.99
A standoff between the Italian navy and a migrant vessel leaves Meath struggling with a patriotic duty that made more sense in the fantasy Assante created. Even a violent militia group called the Knights of Albion are accepted as patriots in this new country Spode envisions. Buried under black propaganda that villainizes the hurting, Meath is forced to clash with reality, including the appearance of Myers's mother, while Gilmour and Coal uncover the truth behind twisted Foresight experiments.

Read the album
Add to cart
Added to your cart
Incursion TPB
(0)
$14.99
The debut of Valiant’s biggest villain: the alien conqueror Imperatrix Virago! The only thing standing in her way is the Eternal Warrior and Geomancer. Can the duo of heroes protect the planet from a seemingly unstoppable extraterrestrial foe and her army of the undead? Collecting the complete limited series, INCURSION #1-4.