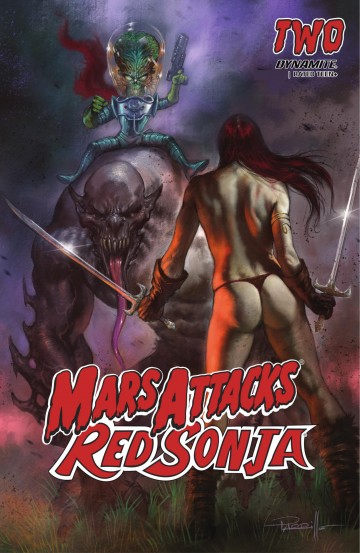 Hyborian-era Martians attack Hyborian-era humans—including Red Sonja! But Sonja’s got a whole posse of new friends and one very important charge to keep safe, and nothing, not even bug-eyed aliens, is going to keep her on the run for long. Swords, ogres and ray guns! What the heck else could you possibly want?! By the deranged team of John “Chew This!” Layman and Fran “The Man” Strukan!

Read the album
Add to cart
Added to your cart
C.5 - Mars Attacks Red Sonja
(0)
$3.99
Oh no—looks like the bad guys have won! The good guys are defeated, and the leader of the Martian invasion has declared himself absolute ruler of all of Earth. And Red Sonja? Well, she died last issue, beheaded by her mighty Martian warrior counterpart-- Green Sonja. How is our Hyborian heroine supposed to come back from something like that? HOW INDEED?!?! Join us for the unforgettable conclusion of the most thrilling crossover in the universe!

Read the album
Add to cart
Added to your cart
C.1 - Mars Attacks Red Sonja
(0)
$3.99
A tribute to women in comics & manga!
Enjoy adventures from a female perspective!

Read the album
Add to cart
Added to your cart
Mars Attacks Occupation
(0)
$11.99