Chapter 1 of 5: Thomas Simmons was working on an experimental suit his father built, when an explosion burned him alive. However, he survived thanks to the suit he was working on and together with two strangers named Shin and Nightstar he now fights for all those who can't fight on their own. 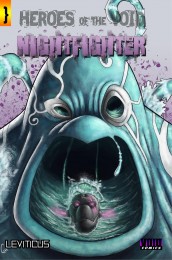 The dawn of bio-engineering changed the criminal landscape for the worse. Genetic modification and bio-organic weapons have revolutionized the black markets and gave rise to a new kind of criminal: The Geneticist. These "doctors" play god with the lives of millions of people. No longer are gangs limited by their own poor abilities or intellect. If they can pay, they get equipped with the latest in genetic and cybernetic advancements. This process is of course highly illegal, but since when has that ever stopped criminals from doing what they do? They are criminals after all. Genetically enhanced criminals overpower the police already, but their growing numbers make matters worse than they already are. Of course, corrupt businessmen and politicians have a great interest in augmented enforcers the police can not stop. There is a lot of profit to be made with such people. Thomas Simmons was working on an experimental suit his father built when an explosion burned him alive. However, Thomas survived thanks to the suit he was working on and help he got from two strangers: Nightstar and Shin.After defeating the man responsible for the explosion that destroyed his life, Thomas became a superhero known as Nightfighter. Together they now fight for all those who can't fight on their own.