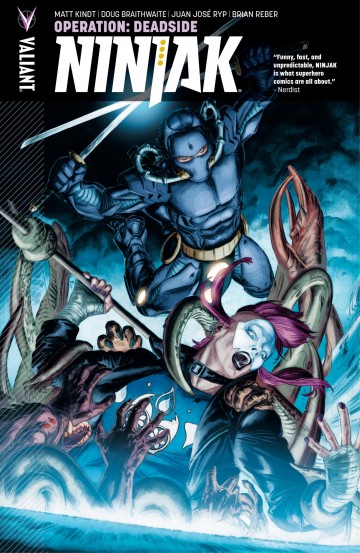 In December 2015, a covert military intelligence unit sent a team of 20 agents and one special operative into a parallel dimension. Only one came back. The purpose of their mission was classified. Now, out of options, MI-6 has recruited their most elite operative – codename: Ninjak – to follow the doomed mission’s sole witness back into the dimension called Deadside…and bring her missing teammates home. What will they find there? And who will be waiting for them? Jump on board here as New York Times best-selling writer Matt Kindt (DIVINITY) and superstar artists Doug Braithwaite (ARMOR HUNTERS) and Juan José Ryp (Clone) reunite for a terrifying journey into an unknown plane of existence…and bring Ninjak head-to-head with Shadowman. Collecting NINJAK #10–13.

This digital comic is available in english version. The following reading modes are available with the izneo reader:
Ninjak- Volume 3 - Ninjak Vol. 3: Operation Deadside TPB - Doug Braithwaite - to read online on izneo or download on your iOS and Android tablet or smartphone.

Read the album
Add to cart
Added to your cart
V.6 - Ninjak
(0)
$19.99
Darque destinies! Master Darque – the sadistic lord of death and resurrection – yearns to be free once again, but first he must fight for his life. Darque is a target, his powers are weak, and his enemies know it. Now, Darque’s own former pupil and Ninjak’s ruthless arch-nemesis – the lethal assassin known as Roku – has gathered the Shadow Seven together again for the sole purpose of putting Darque down for good. And the only thing holding their uneasy alliance together is a mysterious benefactor from the shadows… someone who also goes by the name Darque…Everything has led to this… Out of the ashes of BOOK OF DEATH, Ninjak and Master Darque will collide in a punishing circle of death, destruction and hellfire! Join New York Times best-selling writer Matt Kindt (DIVINITY III: STALINVERSE) and blistering artists Marc Laming (Planet Hulk) and Stephen Segovia (UNITY) here for a steel-hardened jumping-on point that will leave Valiant’s seven-time Harvey Award-nominated series forever scarred! Collecting NINJAK #22–27.

Read the album
Add to cart
Added to your cart
V.1 - Ninjak
(0)
$9.99
Ninjak- Volume 3 - Ninjak Vol. 3: Operation Deadside TPB - Doug Braithwaite - to read online on izneo or download on your iOS and Android tablet or smartphone.

Read the album
Add to cart
Added to your cart
Ninjak Deluxe Edition Book ONE HC
(0)
$39.99
From New York Times best-selling writer Matt Kindt (4001 A.D.) and superstar artists Clay Mann (Poison Ivy), Doug Braithwaite (ARMOR HUNTERS), Butch Guice (Captain America) and many more, comes the first oversized hardcover of the seven-time Harvey Award nominated series the A.V. Club calls “immensely entertaining”! Then: Meet inexperienced MI-6 recruit Colin King on his first mission in the field as he learns the basics of spycraft and counterintelligence, and develops a volatile relationship with his first handler. Now: Colin King is Ninjak, the world’s foremost intelligence operative, weapons expert, and master assassin. And he’s hunting the Shadow Seven – a secret cabal of shinobi masters with mysterious ties to his training and tragic past. Collecting NINJAK #1–13, this deluxe hardcover comes packed with more than 20 pages of rarely seen art and extras!

Read the album
Add to cart
Added to your cart
Ninjak Deluxe Edition Book 2 HC
(0)
$49.99
A tribute to women in comics & manga!
Enjoy adventures from a female perspective!

Pre-order
Added to your cart
BRZRKR Vol. 1
(0)
$15.99
The man known only as Berzerker is half-mortal and half-God, cursed and compelled to violence...even at the sacrifice of his sanity. But after wandering the world for centuries, Berzerker may have finally found a refuge – working for the U.S. government to fight the battles too violent and too dangerous for anyone else. In exchange, Berzerker will be granted the one thing he desires – the truth about his endless blood-soaked existence…and how to end it. Keanu Reeves makes his comic book writing debut alongside New York Times bestselling co-writer Matt Kindt (Folklords, Grass Kings) and legendary artist Ron Garney (Captain America, The Amazing Spider-Man) in a brutally violent new series about one immortal warrior’s fight through the ages. Collects BRZRKR #1-4.
Coming soon