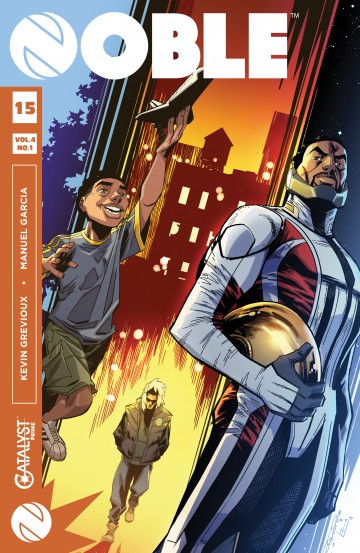 Meet David Powell—the bookish young kid from Houston's Fourth Ward. Obsessed with space, books, and trying a little too hard to please the older kids in his neighborhood, David is a young man searching for his footing in a world where kids who look like him often fall. Long before he became an astronaut—much less a superhero—tragedy struck David's life and set him on the path that will someday lead him to becoming Noble. Past, present, and fate collide—with a little help from nefarious government forces—and the impact will be felt for years to come.

Read the album
Add to cart
Added to your cart
V.16 - Noble
(0)
$3.99
David and Astrid Powell have dealt with more external, circumstantial drama than most couples could ever imagine, from Astrid's CIA-level job stress to David unexpectedly becoming a superhero while on a mission that nearly took his life. What they haven't had is any time to decompress and reconnect in the aftermath, and now that they're making time to see a counselor, it's not what they expected. It turns out they're not the only ones listening to each other's deepest secrets, and the thing that's been surveilling them has malevolent designs on how to use what it's learning.

Read the album
Add to cart
Added to your cart
C.13 - Noble
(0)
$3.79
An encounter with the mysterious Orwell leaves David unable to control his powers, and the city turns against Noble, as the final pieces of Orwell's plan fall into place. Meanwhile, Astrid faces new threats in her pursuit of Esparza, and the trail of bodies he leaves behind him continues to grow.

Read the album
Add to cart
Added to your cart
Noble No. 17
(0)
$3.99
When the xenophobic new director of the FBI's Branch Seven sets his sites on David Powell, he sees nothing but opportunity—an opportunity to rein in any possible threat from the so-called "enhanced" individuals with super-human powers while publicly destroying the most powerful of all of them—the hero known as Noble. Now framed for a devastating false flag terrorist attack and running for their lives from the real perpetrators of that crime, David and Astrid Powell have never before been this close to losing everything.
#StayAtHome