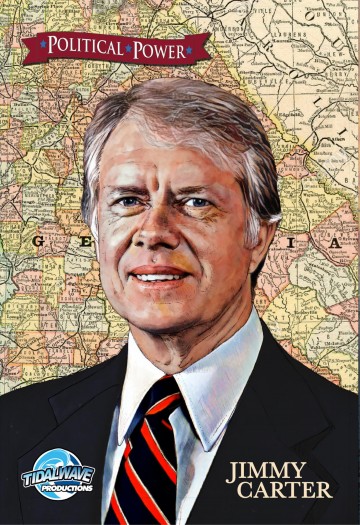 Read an excerpt
$3.99
Pre-order
Added to your cart

James Earl Carter, Jr.'s the hardest working former President of the United States. After serving as Georgia's 76th governor, Carter won the presidency during a tumultuous election cycle, serving one term from 1977-1981. Since leaving office, Carter has made a name for himself as the heart of the Democrat Party, exemplifying his servant- leader attitude. Released in time for his 97th birthday, Political Power: Jimmy Carter explores his life, loves, and leadership.

Read the album
Pre-order
Added to your cart
Female Force: Dolly Parton: The Graphic Novel
(0)
$5.99
The woman famous for proclaiming, "It costs a lot of money to look this cheap" has proven to be a powerhouse singer, songwriter, multi- instrumentalist, record producer, actress, author, businesswoman, and philanthropist. The ascent of country music superstar Dolly Parton from modest means to the most honored female country performer of all time is empowering and inspirational. Parton's voice has brought her fame, allowing her to amass a $600 million fortune she doesn't mind sharing. In addition, Dolly donates to a foundation in her name, has created the Imagination Library that donates books to millions of kids, and even pays students to stay in school. Her rags to riches story is inspiring, but her compassion and giving back have allowed others to break generational poverty, creating a lasting legacy. This dynamic graphic novel, collecting the two-issue series and featuring art by illustrator Ramon Salas, explores her rise to fame and her passion for giving back to a community that has given her so much.
Coming soon